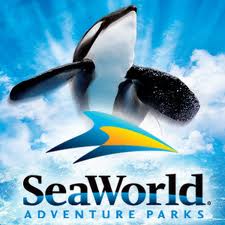 Hey there.  I haven't had a chance to catch up with you guys over what went down this Memorial Day weekend.  I decided long ago that we were not going to stay home this weekend and we were going to have ourselves a good time.  I toyed with the idea of taking the family to Las Vegas, Disneyland, and LegoLand, among many other places but due to high entry prices and/or road trip time, I crossed many of those places out.  In the end, I managed to grab a great deal (buy 1 get 1 free) on SeaWorld admission.  BAM!  We were soooo there.

So we make the drive to San Diego and arrive shortly before noon.  We step out of the van and BAM!  Strong winds smack right us right in the face.  Oh man...  I knew it was going to be a little on the cloudy side, but I wasn't expecting strong winds.  We zipped up and off we went to the park.  We've never been here before so were a little lost and weren't quite sure which way to go... but considering that this is the home of Shamu, we figured that's the first thing we'd like to see.  And literally, Shamu was the first thing we see at the park and we took a picture with it.  lol
After moving along we went off to see the real thing, but first, we had to walk by this dolphin pond thing which seemed to be the training area for dolphins.  Many trainers were in the water and seemed to be working with their animal friends.  Then, we noticed that a few kids had on some swimsuits and were allowed to touch the dolphins!  How awesome is that!  Turns out that SeaWorld now has a special program that will allow your kids to interact with dolphins on a more personal level creating a once in a life time experience.  I walked away from that intrigued.
At the Shamu show, the sun began to beam down and the wind began to die down.  Being in the stands without shade was NOT good.  We avoided the "splash zone" since we didn't have any extra clothes and managed to find an ok spot for us to sit back and catch the show.  More than a few orca whales came out and perfomed for the crowd.  Shamu was among them but I didn't catch the names of all the whales so I just called them Shamu and lil Shamu.  lol
After spending a few hours checking fish, starfish, walking critters (porcupines) and other cool attractions, it was time to eat.  Now...  We usually don't buy lunch at amusement parks.  They cost an arm and a leg and the portions are usually small.  To feed a family of 6 would easily reach close to $100 at a park so we usually bring in something to make for lunch.  We brought in some stuff to make sandwiches, some chips, and drinks.  More than enough to hold us for tonight when we'd actually sit down and have dinner there.  I even called the park in advance to make sure that there was a picnic area.  Great thinking, Victor!  =oD  But once it was time to eat... the so called picnic area was a mear 3 tables that were sitting right by the street and as cars drove by, the food would fly off the table.  Not cool, SeaWorld... no cool at all.  I was expecting a little closed off area a la Disneyland but it wasn't too be.  We rushed our lunch, planned the rest of the trip, and got back to animal gazing.  lol

We caught many shows while there, but nothing was more entertaining than the SLL, Sea Lions Live, show.  That show was awesome.  It's unique in the way that one of the cast members will entertain the crowd before the show starts.  So as he's setting up, he starts to play some very popular tunes... and starts immitating the artists and their dances!  A memorable one is the opening number from Grease where John Travolta and Olivia Newton have their duet.  The guy wore a wig, half Danny and half Sandy, and sang both parts and danced both parts.  Simply classic.  The sea lions weren't that bad either.  They danced, they sang, they grunted, they made faces, all the while doing it a la SNL style.  If you're ever at SeaWorld, do not miss this show!
After some more walking, some more game playing, and some more fun, it was almost time to call it a night.  But wait!!!  We haven't gotten on the Sky Tower yet!  We learned, during one of the shows, that the SeaWorld Sky Tower is approx. 200 ft tall and will give you an awesome view of the park.  We just had to get on.  So we're in line to get on and the baby starts getting fussy...  Oh no.  His K9 teeth are begining to pop out and he's been fighting though it all day.  Just a little while more, champ.  We're almost done.  Then, right before it's our turn to board, my young one says out loud, "This is it, huh dad.  This is the ride of our life. We're going to die."  Oh dear god...  lmao  That was it... the wife wanted to part of that "ride" and we all agreed that we were done for the night.  lol  We walked against the grain, all the way back to the entrance, and packed up our stuff and headed out.  lmao!!!

It was a tiring day.  There is plenty of walking to do and a lot of cool sights to see.  There isn't much in terms of rides for older kids but if your young ones are adventurous and little on the "I want to learn" side, they'll definitely enjoy the many exhibits and atractions that SeaWolrd has to offer.  And with that, I'll leave ya with a few more pics of our trip.  So, what did you guys do this Memorial Day weekend?  Later!