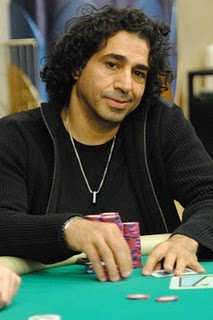 Hey there.  You know, poker has grown into a serious sport these last couple of years.  Is it fair it call it a sport?  I guess, right?  Anyways, I've been watching my fair share of poker on TV, especially the World Poker Tour Championship. It churns out some real intense moments at times and even though you'll find the poker greats all over the tables, you'll spot a celebrity or sports figure as well.  One that has started to make a move is David Levi.

A former paratrooper for the Israeli Defense Forces turned soccer player turned poker player.  His knee injury forced him out of the sport he loved.  Soon after, he made a move to Los Angeles and started taking an interest in poker games.  Like every newbie, he struggled to find a strategy that worked for him and once he did, he has moved up in the ranks of the World Series of Poker.  He's even made it to the final table twice!

Poker is pretty easy to pick up but takes a strong mind to master.  David has practiced his craft and has some great trophies (and cash) to show off.  Some of his accomplishments include winning the 2002 Bellagio tourney, 2003 Legends of Poker, 2004 California State Poker Championship, and the 2006 WSOP HORSE tourney.  David certainly has what it takes to succeed in poker but just like every sports fan, you cannot pry him from the game he loves.  He still prefers to play soccer over poker and plans to share his talents with up and coming soccer players.  Maybe he'll become a specialist coach or a head coach.  Who knows what's in store for David Levi, but until that's been decided, keep an eye out for the wave of sports/celebrity poker stars that are making their make in the poker scene.  Have you been watching?  Who's your favorite poker player?  Later!
Posted by Metallman at Wednesday, June 29, 2011