The Kids and My Father's Presence

Hey there. My pops passed away when I was 9 years old. I grew up without really having a father figure in my life and it was pretty tough. My mother was rarely home so my brother and I practically raised ourselves. I guess that's why my brother and I have a pretty close relationship. Anyways, I always told myself that I would try to be the best dad I could. I am now the dad of 4 and I do my best to provide the best I can. But sometimes... I feel like I'm getting a little help from my pops. 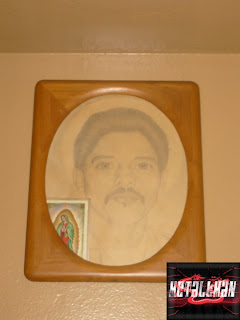 There have been some pretty strange occurrences involving my brother and my kids. First off, when my dad first passed away, my brother would say that he would see him in his dreams. Mind you, my brother was 4 years old when my dad passed, so it's not like he would be making stuff up like that. I'm sure that he was too young to really know what was going on. Then, when our oldest son was born, more weird occurrences started happening. My son would be in his swing, and the swing would inexplicably move on it's own, the TV would turn on and off on it's own, and we would hear some pretty weird noises coming out of a radio that wasn't even plugged in. When our oldest daughter was born, more of the same went on. The same with the swing and I started to hear voices. It never really freaked me out, but it did raise my curiosity.

With our youngest daughter, we didn't have much in that kind of activity, but we did have one huge one. My wife set our daughter down on the couch and she went off to the kitchen. My brother in law was in his room, my wife in the kitchen, and our daughter in the living. Then, my wife hears the sound of someone giving someone a huge kiss. You know, that puckering sound. So she goes over to the living room, thinking that it was my brother in law kissing our daughter. Nope, he was in his room, semi-asleep. My wife freaked. She's never really dealt with anything of that sort so to hear "someone" kiss our baby frightened her. The other night, as we were having dinner, my daughter says to me that she remembers seeing "little daddy" when she was born. I asked her who that was and she said that it was my dad, that she likes calling him "little daddy." It threw me in for a loop but I continued along with her to see what else she would say. She says she remembers seeing him when she was born and that now she misses him. My wife and weren't sure what to make of it. We were not talking about my father so it was extremely odd that she would just throw that idea out there. Now, things are happening with our youngest son.

We find that our son loves to stare at my pop's picture. I have a picture (drawing) of my father in the living room. When we sit on the couch holding our son, we see him stare at the picture and then laugh and coo. Another instance involved footsteps. I was at the store and my wife was sitting with my baby son on the couch. Again, he looked at my father's picture and laughed and cooed and smiled. Then, my wife heard footsteps in the hallway. She freaked. She called me to ask me to hurry home. I check it out and the kids were asleep and I as I stand in the living room, talking to her, we both hear the footsteps again. Pretty intense stuff. And that leads me to the bouncer. Our son loves his bouncer and we believe to have found out why. When we place our son it, we snuggles with his blanket and then drifts asleep. Nothing weird, right? WRONG! That is until you see that the bouncer is rocking itself, even though it's off! It's happened on more than one occasion and I point it out to my wife each time I see it happening. So what are we make out of this?

I say, it's my pops helping me out. It's always happening around our kids, and it's usually when we're trying to rock them or soothe them. I joke around with my wife and tell her that it's my pops doing all the crazy things around the house. The corona bottle, Odin, and since the kids' birth, them. Just the other night, I placed our son in his bouncer and as I was walking away, my wife noticed that the swing was pushed by no one. Yup, it was swinging on it's own. We both just looked at it and said, "Dad, he's in the bouncer." I smiled at wife and she still looked a little freaked out by it. Well, at least we know that my pops is still around, helping out. And if one of the kids start to complain that their head hurts, I'll know it's him... giving them a noogie. lol Later!
Posted by Metallman at Friday, December 04, 2009