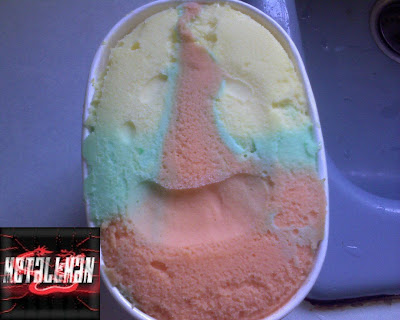 Hey there. Have you guys seen anything like it? lol I went out to get my wife some rainbow sherbet earlier in the day. I just opened the container and look at what I see. The ice scream so happened to be waiting there, smiling at me. Is that crazy or what? lol I compared experience to that of those that see Jesus in a tree or the Virgin Mary in a tortilla. lol My wife suggested that it was the baby smiling because at me because I got the ice cream that he craved. What do you think? What this merely coincidence that it's smiling? Or maybe, divine intervention? Maybe it was worker intervention and thought that it would be a trip to surprise a consumer with a smile. lol Either way, we thought it was hilarious. lol

Oh... This just dawned on me... Maybe it's my pops, smiling down on us knowing that a little one is on the way. You never know, crazy things have happened here before. Like Odin, our dog, mysteriously appearing in the house after locking him outside or the Corona bottle that opened on it's own... Could be... Hmmmm... Interesting. Later.
Posted by Metallman at Sunday, August 23, 2009