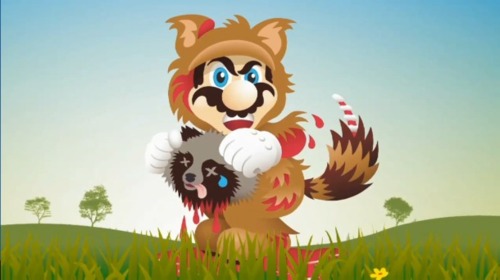 Hey there.  PETA, I get you.  Our animal friends need someone to look out for them.  Someone to make sure they're still around for our kids to enjoy.  PETA, I get it.  Some people skin and kill animals for fun and you know what, I'm not really cool with that either.  But let me tell you something, PETA, when you have beef with Mario, as in THE Super MARIO, then you have gone off the deep end.

Let me shed some light on the situation...  PETA is upset that Mario wears the Toonaki suit.  You know, the suit that everyone wants to wear when they play Super Mario 3.  The game that was released way back in the day.  PETA swears that Mario is condoning wearing fur.  Really, PETA?!?  Wow...  Keep in mind, the Tanooki suit was a suit that Mario could wear to fly and turn into a statue.  Somehow, PETA believes that Mario must have skinned some racoon dogs to obtain those abilities.

I'm sorry PETA, but you're losing me.  You can't go after video games like this.  What are you going to say next?  That Mario is skinning human sized frogs?  You know, he wears a frog suit in that game as well.  Why aren't you giving him crap over that?  You're argument is weak, PETA, and it's a shame too.  You should be out there going after poachers and what not.  By launching this "Anti-Mario" campaign, you're simply telling the world that you have nothing better to do.  Get your act together, guys.  Later!

Oh, and before I forget...  the game that you released for your campaign is pretty tasteless.  Mario wears a Tanooki suit, not the skin of a tanuki as a hat.  Get your facts straight.  If you guys want to check out that game, you can find it here.
Posted by Metallman at Monday, November 14, 2011