Are You Ready For Some UNO Roboto? 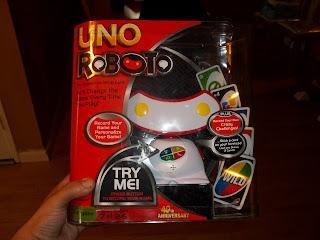 Hey there.  Who doesn't like to play the classic game of UNO?  I used to play this with my family and friends all the time.  When ever a deck of UNO cards were sitting around in someone's house, we'd all gather to play. Even today, it's one of the few games from my childhood that I enjoy playing.  It has it all, deception, unpredictability, strategy, and plenty of laughs!  So when the opportunity came knocking to try out UNO Roboto, I just had to jump on it.

The obvious addition to the UNO game is the robot that it comes with.  A great new spin to an already fun game.  The small, little guy holds the deck of cards on it's head, will record your name, and say it with comments during the game.  But the best part is the "house rules" challenge that the Robot will shout out during the game.  Before you begin, you record a house rule.  It can be ANYTHING.  It can be silly things from placing a pillow on your head, doing a happy dance, sing a song, or in our case, do the robot!  lol  The last one to get up and do the robot had to draw cards!  Hahahahaha!  At our party, we had a whole table of munchies so the wife and I were thinking of using them as a house rule, you know like, the last one to finish a cupcake, but I don't think that would be to healthy.  lol  And because you can make the house rule ANYTHING, the game never gets old since you can always change it up to make it interesting.

Another great addition is the random instructions that the robot yells out.  As you play your standard UNO game, you need to tap down on the robot's head to show that your turn is over.  As you tap his head, one of the many sounds that he uses will chime out.  This is your cue to pay attention since you may be asked to switch all your cards with another player, touch a body part, or participate in a duel with another player.  Because it's all random, no two games will be the same and it adds a whole new level of fun to the standard UNO game.  Common phrases shouted out during our party were, "Awwww, man!", "Nooooooo!", and "Hahahahahaahahaha!".  When have you NOT had a good time when someone yells out during a game?  lol

I would have get togethers with friends and family and we because we're all a fun loving group, we would sit around and play rockband or some kind of board game that can include several players.  UNO Roboto would be a great party game!  By making the house rule something adultish (take a shot, maybe?), a house full of adults could have a blast with UNO Roboto.  The addition of the robot really makes this classic game fun for all ages!

UNO has never lost it's appeal and I've always been a huge fan.  I simply loved the fact that it now has a robot.  lol  I do the robot dance at home (and in public lol) to get laughs of the kids.  Now, each time the kids see the robot, they think of me.  lol  And the kids made it a point to make sure that I post the robot's butt.  They found it funny that the robot had a butt and they couldn't stop laughing at it. lol  Make sure to check out UNO's facebook page and read up on this great game at the official UNO Roboto website.  As an added bonus, Mattel has teamed up with Toys R Us and is offering a free Shutterfly photo album with the purchase of any Mattel games.  That's awesome!  Buy a great game and get a free photo album to record the memories.  Thanks again, UNO Roboto, for bringing back a game from the past and offering it to a new generation.  Now the young ones can experience the joys of a great family card game.  Later!

“I wrote this review while participating in a campaign by Mom Central Consulting on behalf of UNO Roboto and received a product sample to facilitate my review and a promotional item to thank me for taking the time to participate.”