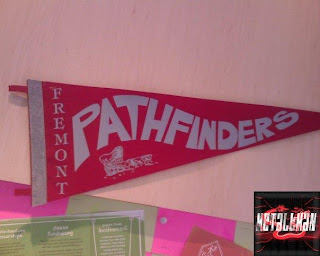 Hey there.  A few weeks back, I received word that my high school in Los Angeles is being taken over by the state.  Yeah, it's that bad friends.  It's right in the middle of South Central Los Angeles and it's in a pretty bad neighborhood.  That's my school, folks.  lol  Well, it turns out that the city got tired of the low test scores and high drop out rate so they've decided to start from scratch.  They are firing the whole staff and new hires will be brought in.  From what I hear, teachers working there now will have to re-apply.  It kinda sucks, since a class mate of mine is a part of the music staff at Fremont.

Fremont has always been bad.  I remember that when I first started going there, an older cousin of mine would tell me to not linger around the school and to hurry home to avoid any gang violence or thug altercations.   From the picture that he was painting in my head, this was the school from hell.  Stabbings, shootings, theft... it was all there, according to him.  And I must say, it wasn't always the case. 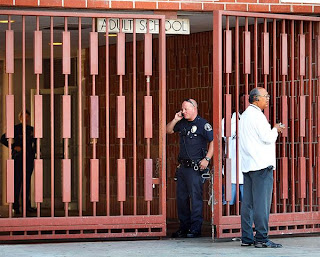 I was a band geek, so I was part of the marching band.  The band had long rehearsals that usually ended well after school was over and on Wednesday, we would be at school until 8 PM.  Now, I don't remember experiencing MUCH of the violence and what not.  I used to stay after school and what not and I can honestly say that I've run into trouble of that nature once or twice but nothing in the scale of what was said.  We did have lock downs from time to time.  Which occurred during school, and usually during class.  For those of you not familiar with the term, it's when NO ONE is allowed to leave their classroom until the "disturbance" has been taken care of.  Usually, police would be involved.  It wasn't uncommon to go through an armed policeman before entering the school.

I remember, after graduation, hearing the news that Fremont was deteriorating.  More armed policeman were patrolling the quad, a fence was built around the school to keep students inside (or the "bad" people out), and the student body just didn't seem to care about their academics.  So now, the Los Angeles Unified School District, LAUSD, has stepped in to take control of the school.  It's tough to say what's going to happen to the school.  What I do know is that this year will play out and then once the year is over, who knows.  Just my luck too.  2010 would be my 10 year high school reunion.  lol  For all the negativity that can be said about Fremont, I think it sucks that it's fallen so low.  I can never wash away the memories and friendships that came with my high school experience.  So here's to you, friends.  Whether our school is still "functioning" or not, I say we take care of business and do our reunion anyways.  Just gonna be a lot harder to get everyone together.  We'll see what transpires, but all I got to say is, "Find a Path, or Make One."  Later!
Posted by Metallman at Monday, December 21, 2009