Hey there. My B day has come and gone. I want to say that I'm 27 now. I really don't want to do the math since I'm extremely tired from this weekend's activities. Let's get a run down, starting from Friday.

My wife had a get together planned at the house for my B day. It was mostly my cousin's that showed up with a few of their friends. There was way more food and drinks that we could consume and after once everyone was feeling a little buzzed, my bro suggested we all play rockband. I think the boy is hooked on singing. He had us laughing since he demonstrated the moon walk while singing Beat It. lol My wife was filming and I haven't gotten the chance to see the vid but if it's as hilarious as I remember, it's going on Youtube. lol My bro also seemed genuinely disappointed when it was time to go. He didn't want to cough up the mic. My mother and many of my cousins were going to take part in Revlon's Walk for Women, a walk to help fight women's cancer, so they called it a night pretty early. Our last guests went home a little after midnight which bring me to... 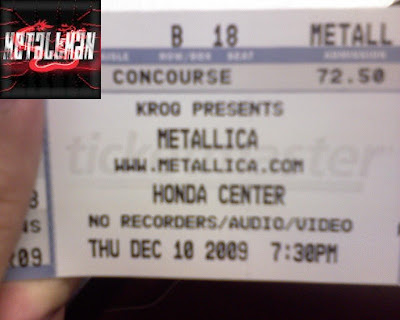 HAPPY BIRTHDAY TO ME! My wife got me METALLICA TICKETS!!! That's right. A little after midnight, she reaches into her purse and pulls out 2 tickets to go see Metallica in Anaheim. HELL YES! Does my babe rock or what! We busted our asses off trying to get them off of KROQ when they were giving them away. You needed to be caller 20 to be a winner and the best I got to was caller 18. Concert is going to be in December... I want to see Metallica NOW! lol Once I calmed down, we went to bed. We then had breakfast the next morning at IHOP. We also had to handle some home loan business. We were able to get our home loan remodified (Thank you President Obama!) and got our mortgage reduced and a way better interest rate than when we first got the loan. So after breakfast, we went to the bank, got the certified check that we needed and then dropped off all the paperwork at FedEx. We then drove home to relax a few before heading out my cousin's baby's Baptism. They had horses for the kids to ride, which was pretty cool, but the story of the night actually came from their neighbor's house. When we first walked in, we noticed that the neighbor's where hanging out by the fence. We figured they were hanging out there to catch a glimpse of the horses and what not. Well, it turns out that the neighbors where there because their baby was trapped in the car. THEIR BABY WAS TRAPPED IN THE CAR! No one realized the severity of the situation until a AAA truck pulled in their drive way to open the door. And this was about an hour or so after we arrived! God knows how long the baby was in there. It upset me some that they left the baby in there for so long. If it was my child, I would not leave him/her in there for anything close to an hour. I would have busted a window or something. We hear in the news all the time how a parent would leave their kid in the car only to come back to a dead child because of the heat or suffocation. They were lucky that this happened during the evening so heat wasn't a factor but still...

HAPPY MOTHER'S DAY! I surprised my wife with a set of flowers and her Mother's Day gift. She's been wanting a set of Doc Marten Boots so I got her a pair. 20 eye Docs with a zipper on the side since I know that lacing up could be a pain. We then went to have breakfast at Mimi's Cafe. I made reservations well in advance since I know it would suck to wait for a table. We showed up and waited no more than 10 mins before being seated. We were there first. My brother was to take my mother and grandma and we were expecting my mother in law as well. My wife got a little upset since her mother was running a little late. My mother was running late too so I told her not to let it get to her. We all sat down, had our breakfast, cracked some jokes and went on with our day. We went to my Aunt's house since she asked the night before for everyone to show up at her place to watch the Laker game (Damn Losers!). We were one of the first to get there and after awhile, the swarm of people that is my family started coming in. The kids ended up jumping in the pool. My wife and I felt a little uncomfortable with them in there since they're not the best of swimmers. One of my Aunt's piled on the floating devices on our little and once they all had their floating tubes, they were having some fun. We didn't feel at ease until I jumped in with them. I had too. Was the only way I really feel comfortable since the pool did not have a shallow end. So yeah, after killing hours in a pool and eating afterwards. We took off, tired as hell. 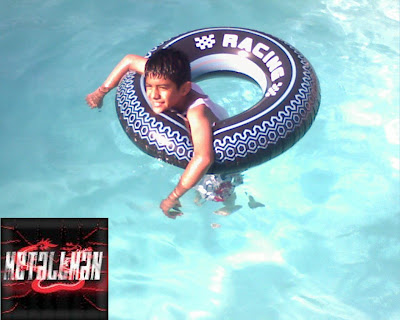 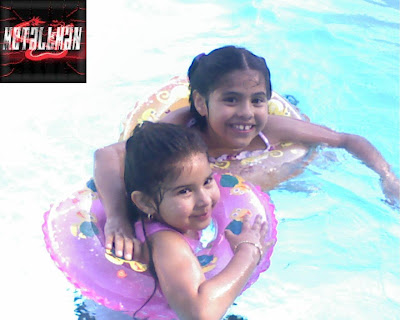 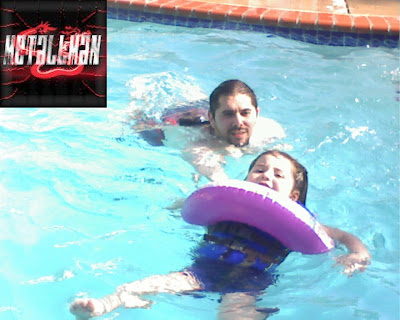 At work, tired as hell. Had to roll off the bed cause I didn't want to get up. I think the whole family is tired from this weekend. None of the kids seemed to be awake this morning. lol They all seemed sluggish and hesitant to get up and that includes us. So, that was my weekend. How was yours?
Posted by Metallman at Monday, May 11, 2009