There's No Room for Crying in the NBA LeBron!

Hey there.  If you're a NBA fan, you've heard by now how the Miami Heat, once again, collapsed under the pressure and loss a meaningful game against the Bulls last Sunday.  Why is this a big deal?  Because the Heat, dubbed "The Super Team", consists of NBA All Stars Dwayne Wade, LeBron James, and Chris Bosh, were celebrating like they have won the championship before they ever stepped foot on the court and they are losing against the best in the NBA.  According to some stats that have been floating around, the Heat are something like 1-9 against the NBA's elite.  Their only win coming against the LA Lakers.  They have yet to beat the Celtics, The Magic, The Spurs, The Bulls, or the Mavericks.  And this is supposed to be the team that was going to the challenge the NBA record of 73 wins in a season.  They have 43 wins now and I don't see them cracking 55.

Now, back to this weekend.  In a game where the Heat claimed they had to win, they loss, yet again.  They were up by more than 10 points during the game.  Wade and LeBron looked good in the first half.  All they had to do was maintain their lead in that 4th qtr and they'd come out with that victory, but again, missed shots by Wade, missed shots by LeBron, stupid fouls by the Heat, kept the Bulls in the game.  The Bulls are an awesome team.  They're second in the East so they're no pushover, but with the Heat down by 1 and with Wade and LeBron on your side, you should be able to make shots in the clutch.  They have yet to have a single game winning shot this season.  The so called super team cannot muster a single win on a last second shot.  After the game, their coach claimed that some of the Heat players were crying. 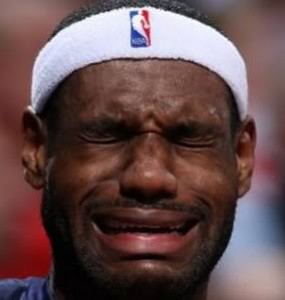 Now this is where I have a problem.  There is no room for crying in the NBA.  If you are crying, they are tears of joy after winning the NBA championship, NOT after a loss during the regular season.  There is absolutely no reason to cry.  And I'm looking at you, LeBron.  What's wrong?  You're realizing that you're not as good as Kobe or MJ?  You can't carry your team, or should I say Dwayne Wade's team, over a quality win?  You're realizing that "The Decision", the prancing around, and the guarantees of championships were stupid moves made by you and the team?  Grow up, man.  You're a great player, no doubt about it, but you have made some pretty stupid moves this year and many of the fans that have become "witnesses" are now witnessing your flaws.  You couldn't do it in Cleveland being the man, now I believe you are realizing that you can't do it being a wing man.  You force bad shots at the end of games trying to be the hero.

Now, I'm a Lakers fan.  Always will be.  But I'm also a fan of the game.  I'll watch the east powerhouses go at it so that I can see an entertaining game.  I'll watch our western conference foes play against each other to better assess our competition.  But when I hear a team chirping away that they're the best before even playing a game, it insults the intelligence of us fans.  We know that it takes more than just talent to win (eg. Malone, Payton, Bryant, Shaq Laker team...).  You need chemistry and you need an identity.  Right now, the Heat have no identity and they have shown flashes of some chemistry, but nothing that can say this is a championship caliber team.  Time is running out.  If they cannot get it together before the playoffs start, they will be bounced from the playoffs in the first or second round.  Then, LeBron, you'll have a real reason to cry.  Later!
Posted by Metallman at Tuesday, March 08, 2011