Not in my Garage 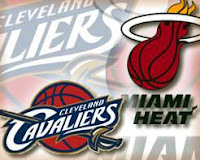 Hey there.  Last night, the Cleveland Cavaliers got a little revenge on the much hated LeBron James and the Miami Heat.  For those of you living under a rock, LeBron James left the Cavaliers in the off season and made a spectacle of it.  All the while, stringing along the Cleveland team and their fans.  Because he handled the whole thing in a tasteless way, there isn't much love for LeBron in Cleveland, and the owner is making sure LeBron knows it.

In their first meeting, the Heat put a pounding on the Cavs.  Just killed them.  In last night's game, it was a completely different story, and it all started in the Quicken Loans garage.  That's right, the garage.  lol  While a Cav, LeBron was free to do whatever he pleased in the arena.  He brought in his friends into players only areas and pretty much flaunted the whole "king" label.  He tried to do the same last night and the owner made it clear to his staff that the players only area was strictly for players only.  So when LeBron showed up with a whole crew of friends, guess who got turned away at the garage entrance?  lol  LeBron was allowed in, while everyone else was told to go back. 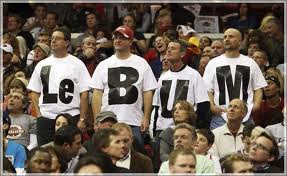 Now this is standard stuff.  There is no discrimination going on here.  It is a rule that is strictly enforced and LeBron should have taken it in stride and said to his people to go the other way.  But instead of that, he decided to act like a baby and during the Heat introduction, he was missing.  What?!?!  When was the last time that you saw a player that present when being introduced?  It was one of the most ridiculous things I have ever seen and I can't believe that this guy still doesn't get it.  So what was his excuse?  He had to go to restroom.  HA!  What kind of excuse is that?  He's not above the game, not everyone is going to allow him to do what he pleases and I applaud the Cleveland ownership for making that stand.  He pretty much LeBron, and the world, that he's had enough of LeBron walking all over Cleveland and that they have finally turned a new leaf.  So what happened during the game?  The Cavs beat the Heat by 12 points or so.  The lowly Cavs, having only 14 wins or so this season, beat the "super team" of the Miami Heat.  The win, and the day's prior events, excited the Cleveland owner that he Twittered this message, "Not in our garage."  4 simple words, yet filled with such emotion.
Posted by Metallman at Wednesday, March 30, 2011