Hey there.  You know what... I really hate dealing with medical bills.  If it's not one thing, it's another.  We've been in a constant battle with medical bills ever since our son was born.  We've already spent countless hours on the phone with our insurance companies to assure ourselves that we know what is covered and what was not. 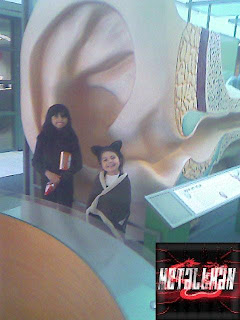 First, it turns out our son was not covered... How the hell can that be when we are insured and our son should be automatically added for a month or so, to our insurance.  After a lengthy battle there, turns out he was covered and we got it taken care of.  Then we had to deal with the ear doctors since our son needs to get his hearing screened (turns our he has fluid in his ear so they couldn't do it in the hospital).  After that nightmare, we finally got "authorization", we got the appointment done and we took care of business.  Now we get a call from those same people saying we never showed up for the testing.  What the....  My wife was there... I yelled at some people there because the docs "lost the chart".  My wife took a pic of the girls near some giant ear because it would be a cool pic.  Yet... these people say were missed our appointment?!?!?!  Now we gotta call them back and set them straight... Not to mention to call back the hospital where our son was born because it turns out we owe them money for stuffs we thought was taken care of by our insurance!!!  UGH!!!!

I was pretty upset this morning when they called saying what they had to say.  I'm allowing myself some "calm down" time because I don't want to yell at these people while I'm at work.  I plan on calling after lunch and taking care of this because we were clearly under the impression that all was taken care of and we were good to go.  Now, almost 7 months after our son is born we get this call out of the blue saying we owes money.  Hell with that...  We didn't receive any bills and it's extremely upsetting that these kind of calls just spring out of no where.