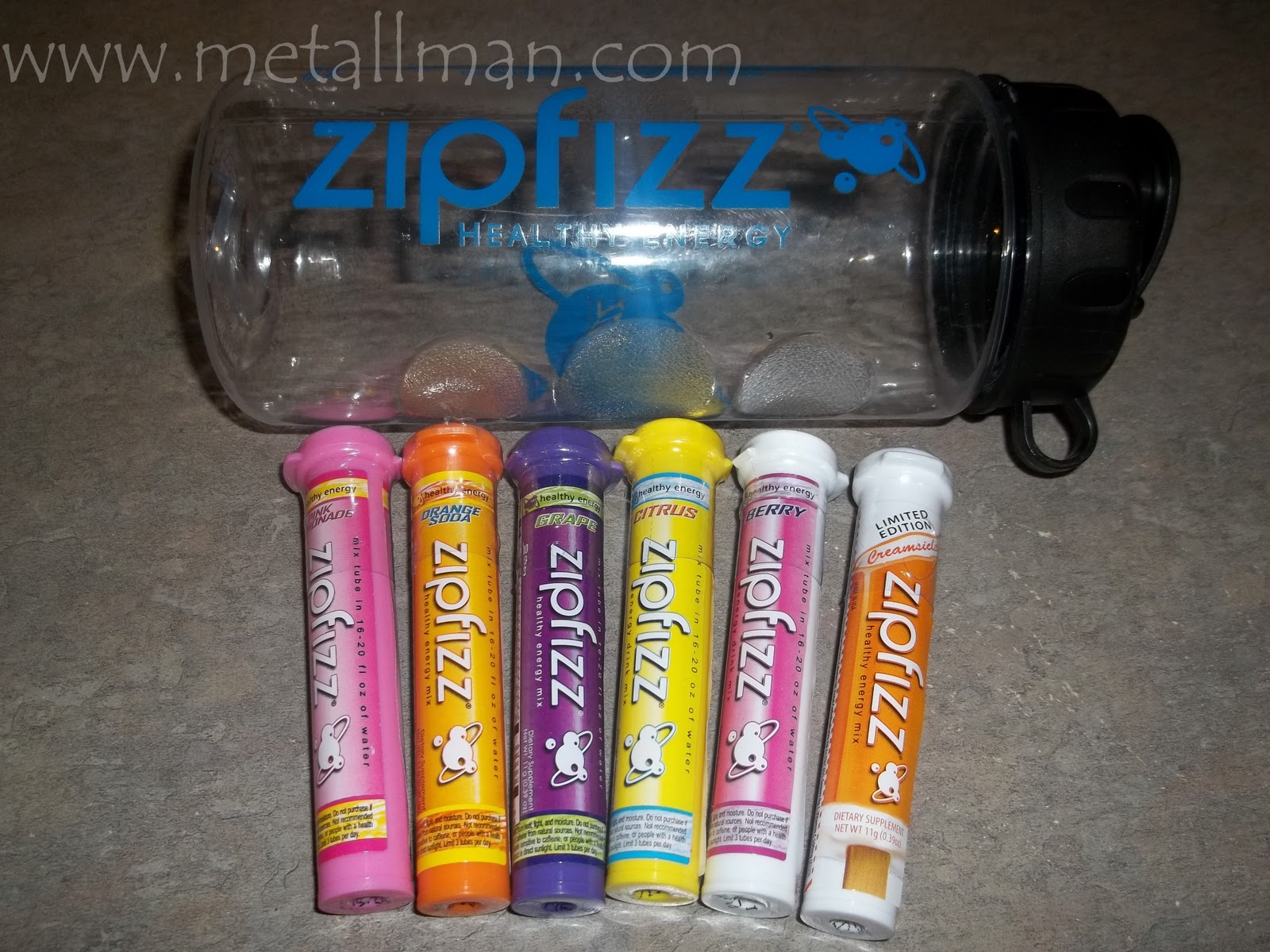 Hey there.  Like millions across the world, I have started the new year with some goals in mind (I refuse to call them resolutions).  The one that I'm primarily focused on is my goal to be more fit.  I'm not fat, well, I at least I don't think so, but I know that I get a little on the tired side when I shouldn't.  For example, walking up stairs.  lol  I'm been working out on and off throughout last year.  I even did the Insanity workout for a few weeks.  Yup... weeks.  lol  Anyways, I find myself needing some energy during the day.  If you don't have the proper fuel for your body, you will drag during your workouts.  Trust me, I should know this.  I've tried quite a few energy drinks and my current favorite are the Rockstar drinks.  But that doesn't mean I'm not willing to try a new one.  The latest energy drink that's on my radar?  Zipfizz!

My good friends at Zipfizz provided me with a sample pack of Zipfizz healthy energy drinks as well as this nifty sports bottle.  It's almost as if they new I would need a sports bottle for my walking/running adventures with my wife.  lol  Anyways, I was provided with a tube for each of their 5 flavors: Berry, Citrus, Grape, Pink Lemonade, and Orange Soda.  I was also given a limited edition flavor of Orange Cream.  I'm not so sure about that last one.  I haven't tried them all yet, but I did try the flavor that I assumed I would like the best, Pink Lemonade. 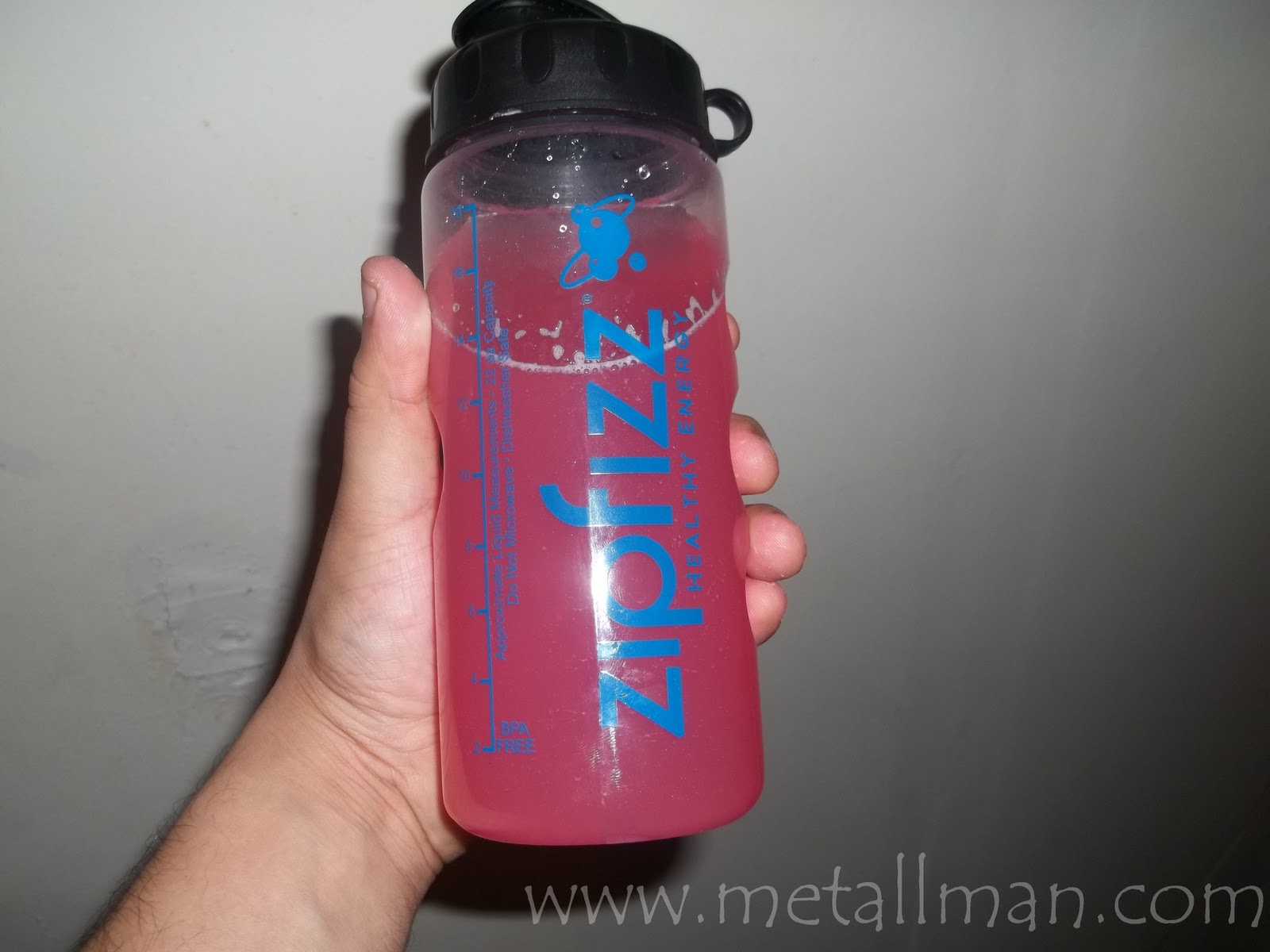 I emptied the tube into the sports bottle and filled it up with 18 ounces of water.  Each tube should be mixed with 16-20 ounces of water so I just chose the number in between the two.  I gave it a good shake and... POP!  What?!  Yup, the sports bottle opening popped open and a squirt of pink lemonade flew out of the container!!!  lol  I guess the whole fizz part of the name should have told me not to shake it much.  The energy drink is slightly carbonated so the gas escaped while I shook it to mix it.  I strongly suggest that you learn from my mistake and stir to mix the drink as opposed to shaking.  And when I say slightly carbonated, I do mean slightly.  I could tell that the fizz was in the drink but it was not overpowering and I see that as a good thing since it did not take away from the flavor. So after feeling pretty drained from the walk, I took a swig of my Zipfizz drink and you know what... it was pretty good.  The Pink Lemonade flavor actually tastes like pink lemonade.  lol  Im sure that we've all had flavored drinks only to have them taste like something else so I was pleasantly surprised that the pink lemonade stayed true to it's name.  As for the energy, it didn't kick in until about 30 mins after drinking it.  It's supposed to give me 4-6 hours of energy per serving.  Maybe because it was night time, I didn't feel like I received the energy it promised, but thinking back, I think I actually did.  I finished my energy drink by 8 PM, then I sifted through boxes looking for cables and TV receivers, I watched The Office with the wife for a few hours, AND I managed to type up a post on the Kindle Fire.  Before I knew it, it was 12:30 AM.  So yeah, I guess it did give me the energy to get some stuff done AFTER my workout.  And the best part about it is that I didn't feel my heart racing or I didn't feel jittery at all.  It seemed like a natural increase of energy without feeling over-hyped or anything of that sort.  That's a huge plus in my book.

If you are willing to try something new, give Zipfizz a try.  You can find it at local retailers like Walmart.  As a matter of fact, if you do buy it at your local Walmart, you can enter into the Zipfizz Fans monthly sweepstakes where the winner will receive a hat, a sports bottle, and a month's supply of Zipfizz.  You can find the details here and again, that's a monthly winner so you can enter each month if you want!  So what energy drinks have you tried in the past?  What were the pros and cons?  Later!
Posted by Metallman at Thursday, January 05, 2012