Hey there. My wife and I were watching TV the other day and my wife brought up the idea of "what if...". She was telling me how she does that often in her head. She'll wonder about the decisions she made and how exactly they have affected her life. It's a fair thought. I'm sure many of us have wondered how our lives would have been have we not got married, gone to college, or took that other job instead of the one you have now. I told her that I don't think like that. I don't see any good in thinking about "what if". She asked me if I thought it was normal that she seems to think that way a lot. I told her that I think it is. If it wasn't normal, we wouldn't see that idea in TV, movies, and books. I think that our minds are naturally curious and a thought like that is bound to get in your head from time to time. But as for me, I don't think I'm the normal one. 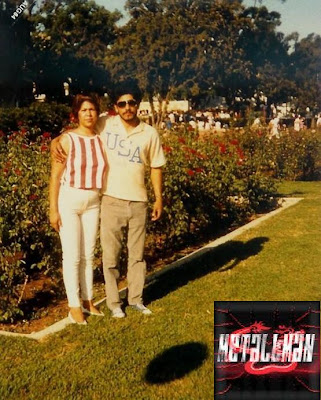 I have not had a thought of "what if" since I was a kid. My dad passed away when I was 9 and I remember the day that changed my life forever. My pops loved soccer and played in an adult league. That day, he went to his game and asked me to go. I refused. I decided to stay home that day. He ended up going to the game and afterwards, hung out at his friend's place for a few brews, which was the norm. What took place soon after was not. From what I was told, an argument broke out between a friend and his wife. I am not sure if the friend struck his wife or what, but my pops intervened and when his friend stuck him to free himself, my pops struck back, but struck the wife by accident. Before we know it, my pops is in jail and that was his last taste of freedom. While in the L.A. County Jail, I'm pretty sure he was murdered. Cops said it was suicide, but from seeing graphic pics of his body (which I should not have at such a young age), the bruising and cuts did not fit in to a suicide attempt.

I drove myself crazy during that point in my life, wondering, "what if I went with him that day?" Would we have gone home earlier? Would the argument between husband and wife even occur if I was there? It's a terrible way to think. What if, what if, what if... To be 9 and have this burden on you, it's just not healthy. It was a daily struggle to not think "what if". Once I came to grips that no matter how much wondering and playing different scenarios in my head and my pops wasn't coming back, I refused to allow myself think like that. I do not wonder or think in the form of "what if" anymore. No point in it. I've dealt with those demons and I don't need to step into that realm again. What's done is done and what happened is in the past and unless someone has that DeLorean from Back to the Future, there really isn't anything you can do about it.

All that has occurred in my life, the decisions made and not made, the good times and the bad, have made me the Metallman that I am today. There really isn't anything that can be done to change that. Later!
Posted by Metallman at Thursday, May 07, 2009