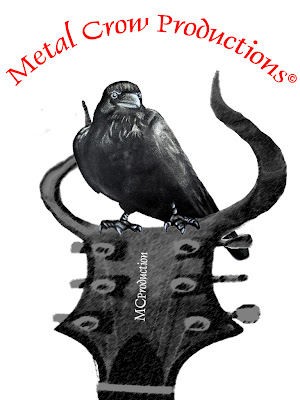 Hey there. A guy can dream, no? Well, in this case, it's the dream of two guys. My compa (Crow) and I have finally decided jump on our ideas and make them into reality. Introducing, Metal Crow Productions. The logo on the left is something that he came up with. Not too bad, right? The logo may still change even though I think it looks pretty bad ass as it is.

Anyways, though our ideas have been brewing since forever, we have absolutely nothing to show for it... yet. This will serve as a great portal for us to display some creativity from just about any means that we see fit. We've talked about filming a short movie, we've talked of creating a web show, we've even discussed the possibilities of creating a web comic. We've even gone as far as to discuss a whole story, from beginning to end over the course of an hour long instant message, but we've never got around to putting any of it in paper. Many people have lost ideas into obscurity because they either had no means of expressing them or they were seen simply as ideas and not something that can be actuality. No more excuses for us! I'm excited, I'm ready, and I'm curious as to how far we can get this to fly.

We have nothing but an extremely brief introduction on the site. I wanted to get it set up so that when ideas come a flutter, there's a place where we can store them. So, remember the name, Metal Crow Productions, so that one day, you too can be like, "Hey! I know that guy!" lol Later!
Posted by Metallman at Thursday, May 28, 2009