Hey there. I ventured into our local Jamba Juice not to long ago and was quite pleased to see that the high school that I attended is sponsoring the Jamba Juice. They had a little corner full of Fremont stuff. Sweaters, banners, flags and what not, all bearing The Pathfinder mascot.

While in high school, I was pretty much anti-school activities. I didn't go to the dances, skipped out on prom, and didn't really participate in anything that the school paid for. I wasn't happy with the way the administration ran the school. Being that it is an "inner city school", it was severely under performing in many key areas. It sucks to be in school and then realize there's not enough books or whatever to go around. Not enough resources to help the students learn. Is it the admin's fault? Or is it California's? I don't know, but I keep an eye out on education because I don't want my kids to experience that crap in their schools. It's a huge let down knowing that you're not going to get work done cause there's a 40 minute wait for a computer at the library. 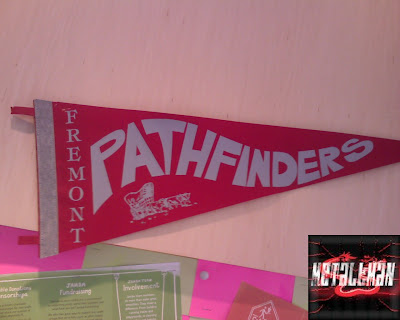 However, I was a band geek. I did participate in many of the band activities since we, the band members or PBO (Pathfinder Band Organization), paid for everything we did. Since we busted our asses off, other organizations took notice and invited us to perform at locales such as The Hollywood Parade. It also offered other opportunities to expand my musical horizons. I learned to play trumpet so that I can be a part of the All City Band. If you watch the Rose Parade, you'll see them marching on TV. And I also was offered a small scholarship from the LAUSD (Los Angeles Unified School District) for my accomplishments as a flute player. YES! I said flute player. Metallman played flute in high school so get over it and stop laughing. lol Music in school was my escape from all the drugs and gang violence in school. A small tidbit on Fremont, it's the birth place of the Blood and Crips gangs, so that should give you an idea of the surrounding areas.

Despite all that, Fremont molded me into me. I was an alright student. I just didn't want to be in class. lol You'd expect someone like to just sneak by high school, but nah, I graduated with honors and took several AP courses in my senior year. Some highlights of that senior year include me calling my AP Spanish teacher bitch (in return she called me "Animal", in Spanish of course...), creating "Viculus" (my short cut version of AP Calculus) and having my Economics and Calculus teacher going at it. LMAO That was a great argument. They were arguing over my grade. My Economics teacher gave me a C, even though I aced the final, he graded me down since I was rarely in class. My Calculus teacher gave me an A since I aced the final, she argued that because I knew the material, I deserved the A. The heated argument then ensued. Classic, classic stuff.

As crappy a school it is, it's still my school. It's where I grew up and it's a part of who I am. So whenever someone gets to talking about high schools, I back up Fremont. Hell with the Lancers, the Roughriders, the Bulldogs, the Eagles, or the much respected Highlanders (Granada Hills). Fremont Pathfinders all the way, BABY!
Posted by Metallman at Wednesday, May 13, 2009