Strike Against PIPA/SOPA. The Day the Internet Went on Strike. Hey there.  Users of the internet are one of the most diverse groups to be ever found.  Angry users, funny users, serious users, working users.  Bloggers, journalists, game addcits, shopoholics... the list goes on and on. It would be amazing if something where to be able to bring this vast group to stand as one.  It's a task that would seem to be impossible.  Well... today... it happened.  Internet users and websites everywhere are taking a stand and striking against the proposed SOPA/PIPA bills that will soon be voted on by Congress.

SOPA (Stop Online Piracy Act) and PIPA (Protect IP Act) sound like good ideas...  but they are ideas that will go to far.  I want to feel safe when going online. I want to be protected... but at what cost?  The SOPA and PIPA bills will basically rid you of your free speech on the web.  Here is a break down of what the bills propose.  I am paraphrasing so don't take the below as the EXACT wording of the bills.
Do you really want to deal with that?  There is some pretty vague dialogue in these bills and they will severely restrict what we can do, say, post, share, and whatever else we feel like doing online.  Piracy is one thing... censorship is another.  The above reasons are why the internet is standing as one as opposed as millions of entities.  Millions are making their voice heard by protesting today.  Websites will be down to show unity and a petition is being signed to show strength.  Sign the petition here to make your voice heard! Later! 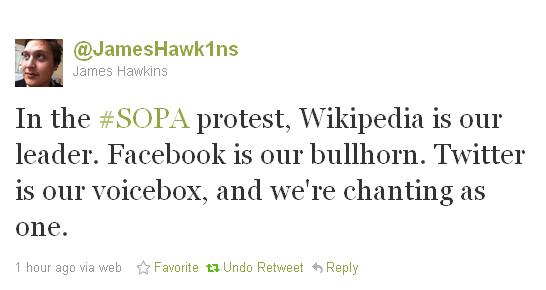