Hey there.  As most of you know, I've been hitting the gym.  Oh yeah!  I keep tabs of the circumference of the my arms, chest, and waist.  So far, I've both arms and chest increase and a slight decrease in my waist.  So here's the question:  Why do I weigh the same?  I've been hovering around 170 since I started this mission and as of yesterday, I'm at 172 lbs.  What gives? 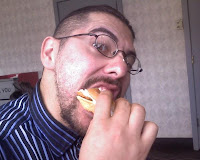 I tell myself that because there is increase in muscle (or so I hope there is), I'll be heavier as opposed to having fat.  Hmmmm...  I don't know if that's true, but that's what I'm sticking too.  The fact that I'm working out and eating cupcakes/donuts/twinkies/chocolate/candy/meals at midnight would have NOTHING to do with my not losing weight... right?! Fine... I guess that would have something to do with it, huh.  So I've come to the conclusion, exercise is awesome.  Exercise with less crap intake, probably even better.

I don't like using the word diet.  My wife seems to always be on a diet and I don't like how she repels certain foods.  I just can't do that.  I've told many people that "men don't diet".  They simply eat less of what they want.  So instead of having those calorie filled midnight snacks, I'll limit it to only one cupcake or maybe even a healthier choice like a milkshake.  lmao!  I know.  I know...  I'm helpless.  lol  Well, I'm going to incorporate this new tactic and see if I'll lose some weight.  I think I've set a new goal of 160 lbs for me.  Maybe I'll stick around at the 170 lbs range but only if I don't look like a chubby.  lol  Wish me luck!  Later!
Posted by Metallman at Thursday, April 07, 2011