Final Fantasy: Type 0 in the Works? 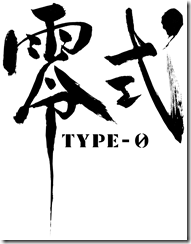 Hey there.  When G4 announced that the name and logo for Final Fantasy: Type 0 was trademarked, it immediately grabbed my attention.  Square Enix might be releasing a new Final Fantasy game!  It may be a spin off... it may be a continuation of an existing Final Fantasy title.  As of right now, it's way to early to tell.  G4 doesn't have info on the project but they're willing to spill what ever they do have.  Check out the brief announcement here.

Intrigued?  Yes.  Excited?  Not so much.  Not until we receive some more details.  For all we know, this is Square Enix trademarking POTENTIAL names.  And even if they are, I would assume that because they are trademarking anything Final Fantasy, some sort of product will become of it.  Until then, later!
Posted by Metallman at Thursday, December 30, 2010