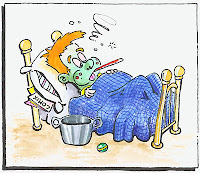 Hey there.  I've been sick these past couple of days.  Not just, feeling like crap sick, but sick in the way where it hurt.  I take pride in the fact that I don't get sick very often.  I can go years before I'm actually feeling any kind of sickness coming... and if I do feel something, it's usually gone by the end of the day.  This wasn't the case on Sunday night.

As I was lying down, I had a strong pain in my stomach.  To the point where I'm lying down in a fetal position.  On top of that, chest pain was beginning to settle in.  Once the chest pain came in full swing, it settled in on the left side of my body near the rib cage.  Quite frankly, it sucked.  I took some meds and went to bed, hoping that my body will do what it does best and I'll be back to normal come morning.

Once I got up and started to get dressed, my body felt like it was pummeled as if I've been in some boxing match.  I was extremely sore and it hurt to move.  I fought through it and went to work anyways.  While I'm sitting on my desk, trying to get through the day, my stomach rumbles...  Whoa...  I didn't think much of it cause to be honest with you, it's been rumbling all weekend long.  I'll be sitting in bed or on the couch and the rumble would be soooo loud that the wife and kids could hear it even though they weren't that close to me.  It wasn't hunger, and it didn't hurt, so I brushed it off.  Then, it happened...  I felt the stuff coming up my throat.  I rushed to the bathroom and let it all out in the bathroom.  It sucked...  I guess I was pretty loud cause when I got out of the bathroom, more than a few coworkers were staring at me and a few asked if I'm ok.  I said no and I went to turn the computer off.  I wasn't planning on staying.  That's when the manager sent me home.

I spent most of the day on the couch... It felt weird to lie down so I sat up.  I watched Gunslinger Girl and the movie Gamer.  I also got some Bioshock 2 game time.  Come night time...  I was feeling a lot better.  Not 100% better, but well enough where the pain is gone and all I'm dealing with now is a slight headache.

I did make a huge mistake yesterday though...  I was drinking a powerade, to replenish some of the fluids that I lost, and absentmindedly gave some to my baby boy.  That evening, he started spitting some up.  Oh man... I'm hoping that I didn't pass on whatever I had to him.  I didn't realize at the time that I shouldn't be sharing anything to anyone that I am drinking out of...  Hope that doesn't cause him to get sick.  I'll just have to keep eye on him to make sure.  I'll let you know what happens.  Until then, later!
Posted by Metallman at Tuesday, October 26, 2010