Hey there. So I participated in a Guitar Hero Competition last night. Needless to say, I was fired up and ready to go. The competition consisted of 4 songs from the Guitar Hero Metallica game. You get to chose the difficulty but the committee get to chose the songs. The songs consisted of No Leaf Clover (Metallica), Dyers Eve (Metallica), Armed and Ready (Michael Schenker) and Black River (The Sword). None too shabby list. Seeing that, I instantly knew that Dyers Eve was going to give me trouble. The song is just too damn hard. I got home, did a few practice songs, and then went right into it. I finished all 4 songs and then checked online to see my ranking. I was in 6th place at the time. Not bad, I did the songs some more to better my score and got as high as 5th place. I took a break from the guitar competition and did the competition on drums. I only did each song once and called it a night for drums. To my amazement, I was leading the pack. Seeing that I was in first place, I didn't bother to better my scores.

I checked out the competition rankings this morning (the competition runs for a full 24 Hrs and it started yesterday at 5PM Pacific time) and I am disappointed to say that I fell out of the top 10 on guitar and slipped to number 2 on drums. Check it out. 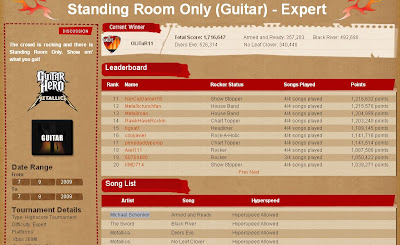 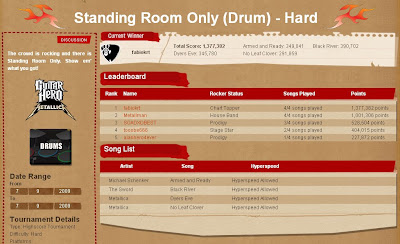 Not too bad for my first tournament. The guitar players in these competitions are simply bad ass and I cannot compete with them. The dude in first place damn near scored a perfect on Dyers Eve and I struggle to get 4 stars on it. Looks like this grasshopper has a lot more practicing to do if I plan on cracking the top 10. I'm a little surprised that I'm holding my own in the drum competition but I know that most of the competitors have not logged in their scores yet. I was initially shooting to finish in the top 10 in each of the competitions. Looks like I'll fail in one of them.

The next competition will be held this weekend. It will consist of 4 songs from Guitar Hero World Tour. I'm not very good at that game since I'm just not familiar with the songs. I went ahead and entered that competition. I'll be competing in the Expert Guitar and Expert Bass competitions. I'm not sure what the song selection is but eh, decided to give it a go anyways. Wish me luck! Later.
Posted by Metallman at Thursday, July 09, 2009