Hey there. We tried to take it easy this weekend. Didn't go to many places and didn't over exert ourselves at home. We put up the swimming pool this weekend for the kids to jump and we did some house cleaning while they were in there. We also caught many movies this weekend.

First off, I finally made the jump from Direct TV. I know... I know... blasphemy. But you know what, it was the better. Verizon was offering us this bundle package that included FiOS TV so we took it. So now we have FiOS TV, FiOS Internet, and FiOS phone line. I can't complain with the services. Haven't screwed up on me once so I'm fairly happy with it. We still need some time to get used to the TV though. The remote is kinda weird and the channels have not yet been programmed into our brains. I don't know where half the channels are but I know where they may be. lol Like Cartoon Network is somewhere in the 250s area and movies start at 340 or so. lol

Anyways, we spent a fair amount of time watching movies. Anything from WALL-E, to Dark Knight, to 27 Dresses, to Wanted. I also caught this Asian horror film called 3 Extremes. 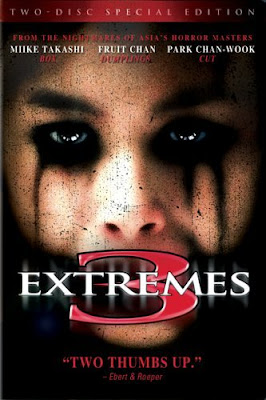 I'm a horror fan. I try to catch the latest in fright but quite frankly, they go for cheap scares like something jumping out of a dark corner or something like that. I tend to enjoy the foreign films a lot more since they go for that "mindfuck" route to not only get you trippin' out over the film, but have you thinking about it afterward. 3 Extremes is one such film.

The film is a collection of 3 short stories, each filmed by a famed horror director from the East (Korean, Chinese, and Japanese). Each has their style and each one was beautifully done. The first short was called "The Dumplings". It's basically a "how far would you go to stay young" story. A woman offers her special dumplings as a means of getting younger. As the story unfolds, you see how the dumplings are manufactured and to what lengths are taken to secure the ingredients. Definitely a chilling tale.

The second short is called "Cut". I enjoyed this short mainly because it was written in "Saw-esque" mode, where as a person is pitted against himself, and the outcome of his predicament depend on his actions. It did half some low points such as trying to force some comedy in unnecessary places, which irked me some, but otherwise, enjoyable.

The last short is called "Box" which tells the tale of sisters. I really can't say much without killing the story but I can say that this one was beautifully done. I loved the camera work and the way the story is told flows gracefully. I loved it. Not a gruesome film, but definitely gets you wondering as to how you would react in the characters situations. I've a got a few more that I have lined up under movies I need to see. I can't wait to catch Battle Royal. From my understanding, a film of teens that are stranded on some island in a no holds barred kinda of death match. I don't know if they were forced or they being there by choice. I'll find out when I see it. Another one I want to see is Tale of Two Sisters. I'll confess, the movie poster intrigued me enough to look into this film and I've found out that the film "The Uninvited" is a remake of this film. I haven't seen The Uninvited, but that may be on my list next, only to compare to the original. Until then, later.
Posted by Metallman at Monday, June 29, 2009