Hey there.  Do you member a time when it fun to toss a rock?  Whether it be trying to knock over a tin can or trying to get it to skip across water, as a child, the most mundane of objects could become an afternoon of fun.  That is the first thought that came to my head to moment I started playing Kersploosh!, on the Nintendo 3DS.  The good people at Nintendo provided me a copy of the game and I am thankful that they did.  The family and I have been taking turns trying to 1 up each others times, and even though there are many big name downloads on the Nintendo eShop, Kersploosh! is one of those rare gems that the whole family can enjoy together.  Well, let's get into it, shall we?

So why the nostalgia? Why so much whimsy?  Well, because the game is as simple as tossing a rock and the visuals are based solely on imagination.  The object of the game is to drop a rock into a well and guide it to the bottom so that it can splash into the water.  Sounds simple enough, right?  But this is where the imagination part comes in.  What is down the well?  You know there is water at the bottom and the only way you know for sure that your rock has hit the bottom is when you hear that splash against the water.  But what if you rock had obstacles to over come?  What if there are slices of pizza?  Donuts?  Wooden boards?  Cookies?  What if they rock didn't make it all the way down because you smashed your rock against an object?  Kersploosh! answers that question with this wonderful delight of a game that you can download at the Nintendo eShop. 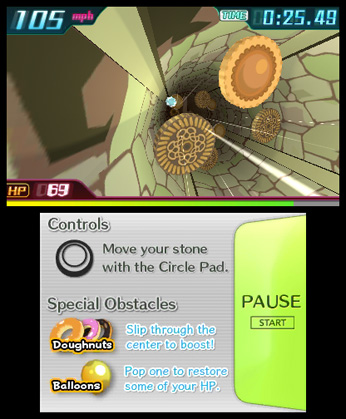 The controls are extremely simple.  You use the circle pad to guide your rock, avoid obstacles, and get to the bottom of the well.  You are timed and the item that you toss down the well will have a set HP amount.  Bumping into the well and other obstables in the well will deplete the HP and once it reaches 0, the game is over.  The obstacles start off easily avoidable but as you progress through the game, you'll see that they increase in amount and in size.  As you unlock more wells (stages), you also get to unlock more items that you can use to toss down the well.  Each item has different HP amounts and have a different feel, movement wise, from the rest.  For example, the rock has a standard movement and as you move the circle pad, the rock moves as well.  If you are to toss a bouncy ball in the well, the ball responds a little slower to the circle pad and will ricochet of obstacles with more force than the rock.  The different items can also bring in different degrees of difficulty so you can play Kersploosh! with the invincible bouncy ball and always make it to the bottom, or try the near impossible and toss in a drop of water (1 HP!) and try to avoid ALL obstacles to make it to the bottom.  The weight of the item also plays a factor in speed and difficulty.  Make sure to check out the stats of the item before tossing it a well.  Heavier items tend to fall at greater speeds but they may not respond as well to movements or stop completely when hitting an obstacle.

Another great aspect about the game is the time factor.  You are timed on each attempt and there is a leaderboard built into the game.  You can gain speed by guiding your object through donuts, allowing you to get to the bottom faster, but you will need quicker reflexes to avoid obstacles.  There are also balloons in the well that will replenish loss HP when you hit them.  The name of the game is to get to the bottom with the best time and get on those leaderboards.  Now... the only problem I really had with the leaderboard is that it seemed limited to your Nintendo 3DS only.  There was no online leaderboards so you could not compete against a friend's time.  You could "pass and play" with friends and family, but having that online capability would have been pretty cool.  Even a Street Pass leaderboards would have been good.

The only big knock that I give this game is on the relatively short length of it. There are only 10 wells in the game and 10 items.  You unlock a new well simply making it to the bottom of the previous well.  If you use the invincible bouncy ball, you can easily make it through all 10 wells in less than half an hour.  If you dedicate yourself to get through the wells with different items, the replay value can be extensive.  Especially when using items with low HP.  But if not, the game can quickly be over.  It is a great time waster, though, and even the youngest one in my family (3 years old) picked it up fairly quickly and enjoys playing.  He loves to guide the bouncy ball and gets plenty excited when he hits the bottom of the well.  If a game as simple as Kersploosh! can bring a smile to my three year old, it definitely brings a smile to me.  Make sure to check out Kersploosh! at the Nintendo eShop!  Later!