Review: The Palms Steak and Seafood Restaurant in Downey, CA 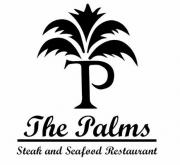 Hey there.  For those of you that know me well, you'll know that I love food.  I've been eating my fair share of meals since as far back as I can remember so when it dawned on me that I could be eating at different places and voicing my opinion on them, I just had to jump on it.  I mean why not?!  It's a great way to help local businesses and I get to share that experience with you.  So to start off my first of many restaurant reviews, here's my experience at The Palms Steak and Seafood Restaurant.  Hope you guys enjoy!

The restaurant is located in Downey, CA.  A small city within the limits of Los Angeles county but nevertheless, known for it's fair share of shopping centers and nice homes.  The restaurant itself is located on the bottom floor of a business building.  A little odd for restaurant.  The wife and I parked in the rear and entered the building.  To our right are glass doors with the The Palms written on it.  We figured, this must be it and step inside.

Atmosphere:
Before I get into the atmosphere, I must say that we went to the restaurant on a Sunday night, 1 hour and half before closing time.  With that being said, it was a ghost town. At a glance, it seemed that no one was sitting at any of the tables before us.  The wife and I stepped inside and to our right was a dance floor, a stage, and what looked like a karaoke machine.  Seems like this place could host a pretty happening time.  Further to the right is a fully stocked bar, which had two ladies sitting there drinking.  Aside from them and the waiter, we were the only people in the restaurant.  Creepy.... Some Spanish music softly played in the background but that didn't stop it from feeling, as my wife put it, "that Leatherface is going to burst through the kitchen at any moment."

Aside from the bar, the restaurant is dimly lit and battery powered "candles" which emitted a romantic ambiance in the air.  Each table and booth had one and considering that the tables were not big, I would consider the place to be more of a "date night" kind of place.  I would not recommend bringing kids, since I can them spoiling the mood.

Service:
We were promptly greeted and asked if we were there to eat.  lol  That seemed a little odd but then again, there was a bar so I chalked that question up to the waiter assuming we were there for a drink.  Once we were seated, the waiter (whom I dubbed, Pablo) took our drink order.  Pablo quickly returned with our drinks and with a complimentary bread basket.  That bread was some of the softest bread that I have ever had at a restaurant and it was hot.  Not warm, hot.  It was that fresh, my friends.  He asked us if we needed anything else and proceeded to take our order.  Pablo definitely knows what he's doing.

Shortly after, he brought us both a complimentary salad.  I'm not a huge salad fan and I don't think that it was anything to write home about.  It was a small cesaer salad, sprinkled with croutons and lightly coated in cesaer salad.  My reaction:  Eh.  My wife's reaction: Yum!

Food:
I ordered the Alaskan Salmon dish and I must say that it was perfect.  The salmon was perfectly grilled and spiced.  I had absolutely no qualms about the quality of the salmon and it's portion, for that matter.  It was at least a good 10 oz serving.  It came with a side of mashed potatoes and angel hair pasta in marinara sauce.  The mashed potatoes seemed to have been missing something.  I couldn't quite put my finger on it, but my wife suggested that it may be garlic salt since that's what she's been putting into the home made mashed potatoes and I may have gotten used to it.  The angel hair pasta was excellent.  It was well cooked and the marinara sauce was not salty at all.  A great blend overall.

My wife was in the mood for some Mexican so she ordered the Carne Asada dish and it did not disappoint.  She was pleasantly surprised to find a cheese enchilada on top of the slab of meat that was presented to her.  The meat was well seasoned, nice and tender.  It came with a baked potato, rice and a guacamole salsa.  The enchilada was so good that my wife was licking the knife.  lol  The baked potato had what looked like small bacon bits and cheese in it.  Though I'm not a fan of bacon, the baked potato was delicious.  The rice was great, down to the very last grain.  But the guacamole salsa... wow.  That was some good stuff.  My wife, who is not a fan, surprisingly found it good.  She was dipping her meat in it and decided that she's going to learn how to make it.  All in all, a very well made meal.

Rating:
Based on my experience, I would give the Palms Steak and Seafood Restaurant a 4out of 5 stars.  Aside from it being a ghost town and Pablo (whose name is really Jorge) didn't offer me a refill, it was a very enjoyable dinner.  I'm sure that if we were to have gone on another night when the dance floor was happening or a live band was on stage, it could have been better, but that didn't happen while I was there.  It's definitely a hidden gem to be found in Downey, CA.  And one where the old adage, "Never judge books by their cover" hold true.  Happy eating!  Later!
Posted by Metallman at Monday, August 15, 2011