A woman takes her 16 year old daughter to the doctor to get her checked out.

"It's my daughter, Morgan!  We don't know what's wrong with her.  She keeps getting these weird cravings, she's beginning to put on weight and she's been feeling extremely nauseous most mornings.  Please help doctor."

The doctor walks over to Morgan and begins to examine her.  After a few minutes of poking and prodding, the doctor turns to the mother and says, "Mrs. Smith.  Your daughter is about 4 months pregnant."

The mother, astounded says, "Pregnant!  How can that be?  She's never been left alone with a man!  Isn't that right, dear?"

Morgan looks at her mother and responds, "That's right mom!  I've never even kissed a man before!"

Upon hearing this, the doctor walked over to the window and began to stare out.  After about 5 minutes of silence, the mother asks the doctor, "Is something the matter, doctor?"

To which the doctor replied, "No, not really.  But, the last time anything like this happened, a star appeared in the east and three wise men came over the hill.  I'll be damned if I'm going to miss it this time!" 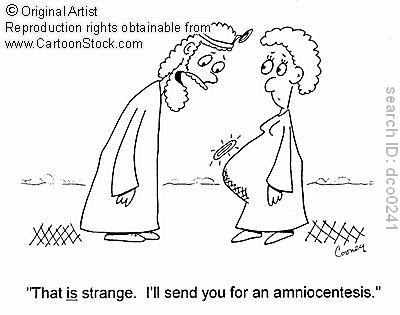