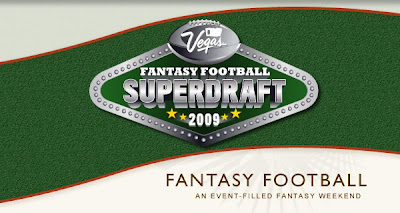 Hey there friends. Football is still months away, but football fans across the US are getting their fantasy leagues assembled. I love football and I love playing fantasy football. I love the fact that you can follow your favorite team but keep an eye other games because your fantasy players are in that game. As a competitor, I want to win and it makes football games that much more exciting knowing that you need those 15 rushing yards to beat your opponent. I can't wait till the season starts!

I'll admit that I've only participated in a live draft only once, and that was because it was more of a tedious task then a fantasy draft. There was no pizazz, no action, and just a bunch of guys in a small room that doubled as every one's war room. No fun at all. I guess that's part of the reason that I've go through auto-drafts now. But I may consider going back to live drafts, especially if my league can do it Vegas style.

During the weekend of August 27 to August 30, over a dozen of Las Vegas' famed hotels will take part in the Las Vegas Fantasy Football Superdraft weekend. Vegas is doing fantasy football right. Many of the hotels have partnered up to allow an average Joe like myself to have a football draft of a lifetime. Hotels such as The Hard Rock Cafe is offering special deals to allow fantasy leagues to reserve a draft room and if you get yourself a platinum wristband during the event, you'll be set for the weekend. The platinum wristband will grant you access to some of Vegas' hot spots as a VIP. I'm a hard rock kinda guy so I checked out the Hard Rock Cafe package and I must say, I like what I see. Especially the after party at the pool featuring the playmate bunnies! It would be the perfect way to wind down after a long weekend.

Fantasy football players everywhere need to check out the Las Vegas Fantasy Football Superdraft . Do a live draft the way it's meant to be; full of fun, excitement, and party. And if you haven't been to Las Vegas, there is no better time to go than with your football league to party. See you there! Later.