5 Things to Know About The Purge: Anarchy and The Purge Anarchy Prize Pack Giveaway 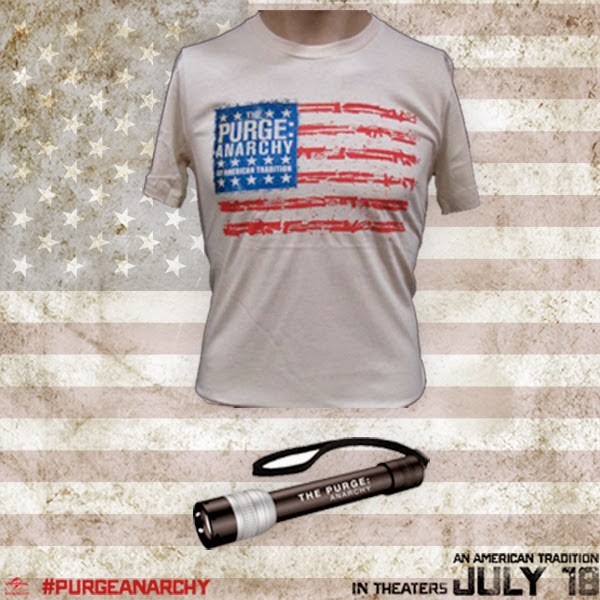 Hey there.  Who's ready for another giveaway!  This time, the giveaway features the upcoming film, The Purge: Anarchy, the follow up film to The Purge.  If you have seen the first film, head on over and read up on my thoughts on The Purge.  If you haven't... then what are you waiting for!!!  Go and see it and then go and catch Anarchy when it hit theaters everywhere on July 18th!  Anyways, we're here to talk about free stuff.  Free stuff that you can win right here on Metallman's Reverie!  Our good friends at PartnersHub and Universal Pictures have provided me with a The Purge: Anarchy Prize Pack to give away to one lucky fan.  The prize pack consists of a The Purge: Anarchy T shirt (size large) and a The Purge: Anarchy promo flashlight.  Before I get into the details of the giveaway, first some movie details:

All crime is legal for 12 hours.  While many decide to barricade themselves for protection, others participate in the mayhem.  The New Founders of America invite you to celebrate your annual right to Purge.  The Purge: Anarchy follows an unlikely group of five citizens who, over the course of the night, are hunted across the city in a kill or be killed series of survivor scenarios during the annual Purge.  Will they survive the night?

Sounds good, no?  The giveaway will run from now until July 25th. The winner will be announced shortly there after. Each household is only eligible to win One (1) The Purge Prize Pack chosen at random via blog reviews and giveaways. Only one entrant per mailing address per giveaway. Must have a residential address. Sorry, no PO Boxes. If you have won the same prize on another blog, you will not be eligible to win it again. Giveaway is open to US residents only. Winner will have 48 hours to respond to winner's Email notification. If a response is not received by the end of 48 hours, the winner will forfeit their prize and a new winner will be chosen. Prize will be shipped by PartnersHub. Winner is subject to eligibility.

As usual, all I ask if a little reader interaction.  Check out the below 5 things to know about The Purge: Anarchy.

Which fact is your favorite?  What would you do if you were caught outside during a Purge? Leave a comment with how you plan on surviving and enter using the giveaway widget below!  Good luck and once the film is out, keep an eye out for my post giving my thoughts on The Purge: Anarchy!  Later!