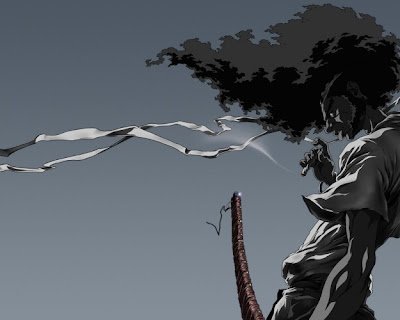 Hey there. I love me some Samuel L. Jackson. I think he's one of the best mother f*ing actors out there. Think about it for a second. The man has done it all. He's is a comic book villain (unbreakable), racist cop (Lakeview Terrace), cracked up junkie (Jungle Fever), jedi master (Star Wars flicks), Jules (if you don't know who Jules is, you're not a fan) I mean... the man has been in dozens of movies and he plays the characters well. AND HE'S NOT FULL OF HIMSELF. He's more than willing to take a role where he's a role player in the movie. I think that's what draws me to his movies. He knows he's a star but he doesn't act like a diva. He takes his fame in stride and isn't afraid to try out new roles. He's not an action man, or comedic actor, or a drama king, he is purely a jack of all trades and has shown that he can play any part that he wants to try out. The man is a chameleon. It's only fitting that the next step in his career is animation.

The man has skills as an actor, he's known for his voice (I go back to Jules) but his facial and body expression aid his performances. Voice acting is one dimensional. The animators will provide you with the facial expressions and body language but you need to bring that artwork to life. The voice needs to breathe life into the character or you just don't believe the story and the man does a fine job in Afro Samurai. 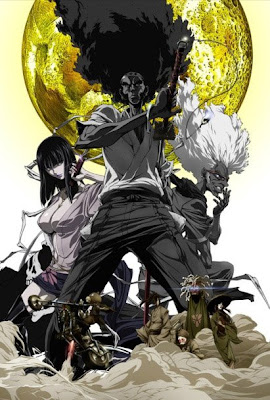 He's credited for the voice of Afro and Ninja Ninja, thought Ninja Ninja is the one that does most of the talking. Afro, a more stoic and stone cold persona, doesn't have much to say during the series but kicks some serious ass. Afro Samurai has been around since 2007 but this year marks the release of Afro Samurai: Resurrection. The first season was simply bad ass. I'm a sucker for a good story and Afro Samurai provided a great story in a much too short 5 episode season. Afro Samurai: Resurrection is a film that carries on Afro's story.

In a nutshell, the greatest samurai battle each other for numbered headbands. The #1 head band being the top dog. Afro's dad held the #1 head band until he was defeated by Justice. A young Afro witnesses this and lives a life fueled by revenge. After he obtains the #2 band as an adolescent, he earns the right to go after #1, all the while, others attack Afro for the #2 band. Enter Afro Samurai: Resurrection here. I haven't looked into it yet since I don't want to spoil it for myself. lol I missed the first airing of the movie on Spike. They are now showing the movie in a four 30 minute episodes. I caught the first one last Friday, episode 2 is going to show this Friday. You guys gotta catch this show!!! Later!
Posted by Metallman at Thursday, February 12, 2009