Hey there. One of the perks that my wife and I have at our job is that my mother in law lives close by. We rarely spend any money on lunch since we're usually treated to a home cooked meal. Today, we were treated to some pizza. My wife, being a semi-health nut, brought her healthy meal from home while I scarfed down some pie. 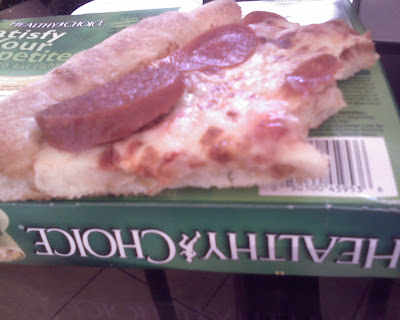 But what's this?!?!?! As I open the box and pull out a slice, this king sized pepperoni stares back at me and yells, don't eat me!!! Have you ever seen anything like it? lol Damn... I almost felt guilty putting it in my mouth. It dwarfed all the other pepperoni slices! I kinda just looked at it in awe for a minute before it decided to jump off my slice and hit the floor, escaping certain death. Nooooooooooooooo!!!!!

I bet it would have tasted heavenly. Now, I will never know. Knowing what I know now, I will not stare at it in awe next time. I will just devour the sucker. Hell, I might decide not to chew just to show it who's boss. That bastard! *sigh* Until then... Later!
Posted by Metallman at Thursday, October 23, 2008