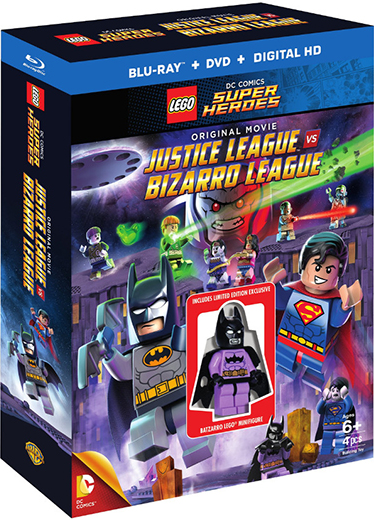 Hey there. Who's up for another giveaway!  This time, our good friends at PartnersHub and I have teamed up to give away a LEGO Justice League Vs Bizarro League Blu Ray Combo Pack to one lucky reader!  That's 3 copies of the film!  A blu ray, DVD, and digital copy of the film!!!  How awesome is that?!  And just because we love you guys, the combo pack will also include an awesome Batzarro LEGO figure!!!  EEEEEKKKK!!!!  Before we get into the giveaway details, here's a little recap of the film:

Batman has joined the newly formed Justice League in order to keep tabs on Superman, a mistrust that is complicated by Superman’s clumsy – but well-meaning – clone, Bizarro. Bizarro’s creation of the Bizarro League has caused confusion amongst the world’s greatest Super Heroes, but an even greater and mysterious threat may force the Justice League and Bizarro League to band together to defeat evil.

The LEGO movies and games have been some of the best, and funniest, forms of entertainment!  And this LEGO Justice League Vs Bizarro does not fail to deliver!  This is a must have for any fan of DC and the LEGO franchise.  Let's not waste any more time.  Now, the giveaway details:

And just like always, all I ask is for a little reader participation.  Check out this great Bizarro name generator.  All I ask is that you create a Bizarro name and share it in the blog comments of this post.  Afterwards, use the giveaway widget below to enter the contest.  It's that easy!!!  Check out my Bizarro name!!! 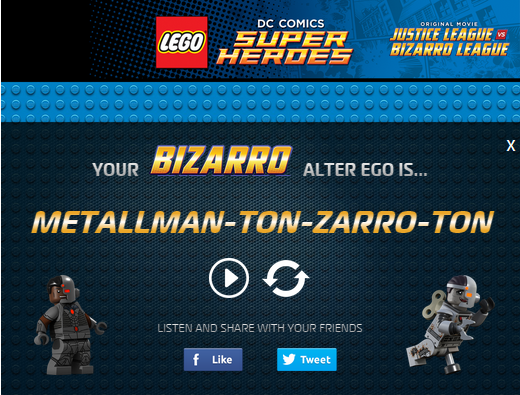 The giveaway will run from now until March 7th. The winner will be announced shortly there after. Each household is only eligible to win One (1) LEGO Justice League Vs Bizarro League Blu-ray via blog reviews and giveaways. Only one entrant per mailing address per giveaway. Prize will be shipped by USPS or FedEx.  Sorry, no PO Boxes.  If you have won the same prize on another blog, you will not be eligible to win it again. If a response is not received by the end of 48 hours, the winner will forfeit their prize and a new winner will be chosen. Prize will be shipped by PartnersHub. Winner is subject to eligibility.Giveaway is open to US and Canada residents.  Good luck!

Posted by Metallman at Wednesday, February 25, 2015