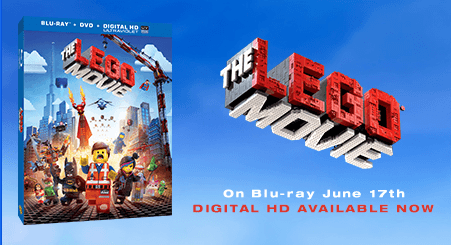 Hey there friends.  This movie is all sorts of funny and has plenty of jokes and pop culture references that you'll always spot something different each time you see it!  And let's not forget the awesome all star cast!  Morgan Freeman, Chris Pratt, Will Ferrell, Elizabeth Banks, Liam Neeson, Will Arnett, and Alison Brie are all doing voices for this film.  Enough with the banter!  Who wants to win this movie on Blu Ray?!  Our good friends at PartnersHub and Warner Bros. Entertainment have provided me with a The LEGO Movie Blu Ray Combo Pack to give away!  That means you'll get a Blu Ray, DVD, and Digital versions of the movie!  Here is a quick synopsis of the movie, courtesy of PartnersHub:


The LEGO® Movie, the first-ever, full-length theatrical LEGO® adventure, directed by Phil Lord & Christopher Miller is an original 3D computer animated story that follows Emmet, an ordinary, rules-following, perfectly average LEGO minifigure who is mistakenly identified as the most extraordinary person and the key to saving the world. He is drafted into a fellowship of strangers on an epic quest to stop an evil tyrant, a journey for which Emmet is hopelessly and hilariously underprepared.

This movie is awesome.  It's just as entertaining for adults as it is for kids.  So now, on to the giveaway details.  The giveaway will run from now until July 1st. The winner will be announced shortly there after. Each household is only eligible to win One (1) The LEGO Movie Blu Ray Combo Pack chosen at random via blog reviews and giveaways. Only one entrant per mailing address per giveaway. Must have a residential address. Sorry, no PO Boxes. If you have won the same prize on another blog, you will not be eligible to win it again. Giveaway is open to US residents only. Winner will have 48 hours to respond to winner's Email notification. If a response is not received by the end of 48 hours, the winner will forfeit their prize and a new winner will be chosen. Prize will be shipped by PartnersHub. Winner is subject to eligibility.

Now, for the reader interaction.  Check out this The LEGO Movie Blog App.  It has this cool feature where you can make a quick 6 second video.  Go ahead and create a video and leave a comment on this blog post telling me who your favorite LEGO character in the film is.  There are many characters to choose from so I'm curious to know who you all thought was the awesom-mess!  So lets hear it friends!  Good luck!  Later!
The LEGO Movie Blu Ray Combo Pack Giveaway