The NFL is Coming Back to Los Angeles

Hey there.  It's been too long.  Way way too long.  The NFL announced this morning that a deal is in place for a new football stadium to be built in Los Angeles.  That can only mean one thing... THE NEFL IS BACK IN LA, BABY!  Here is a glimpse of what the stadium may look like: 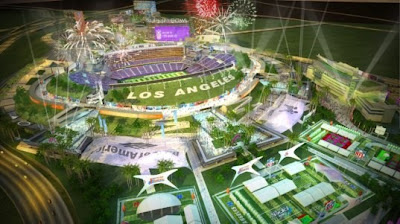 The proposed deal is estimated to be worth approx. $700 Million over 30 years and AEG us at the helm of backing this thing up.  AEG is proving to be one of the powerhouses for Los Angeles.  They were involved in building the Staples Center and now they are involved in building what would be known as Farmers Field.

Now this begs the question:  Are we getting a new franchise?  Or is an existing team coming in?  The Oakland Raiders and the San Diego Chargers are extremely popular in the Los Angeles area.  I would even say that the fan base in Los Angeles is split 50/50 between those 2 teams.  Considering that those two franchises are close by, it wouldn't surprise me if one or both come to Los Angeles.  The Minnesota Vikings and the Jacksonville Jaguars have also been in the running to come to Los Angeles so those are two more teams that would be considered.