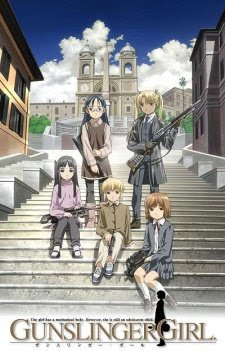 Hey there. I'm loving the IFC channel more and more. They bring you some pretty insane and weird stuff. The documentary, Darkon, was one that I thought was enjoyable. Just insane the way people live out their characters and battles. There was this one movie, that I can't think of the name at this moment, of a blind Japanese sculptor that captures this woman and explores the depths of love and masochism. It's not what it seems and it's crazy the way it makes you think of the psychological side of love. IFC also introduced me to Witchblade, which I absolutely loved. A touching story of a mother and daughter... where the mother, cursed by the witchblade, must fight for a survival that she knows she'll soon lose.

Now, it brings me Gunslinger Girl. I'll admit, that I've only watched one episode but it has already captivated me. The plot in itself is extremely intriguing. Young girls, given a second chance at life, as assassins. How can you not love that? Now I don't know the complete details or story but I love the way the episode played out. Cool, somber color scheme, blended in perfectly with the characters and dialogue, a serious yet playful mood (singing Beethoven at the end of the episode), the characters are not shallow, and the word gun is in the title so you know they'll be some death. Once I get a chance to really check it out, I'll provide more in depth insights, but until then, Later.

Email ThisBlogThis!Share to TwitterShare to FacebookShare to Pinterest
Labels: Anime