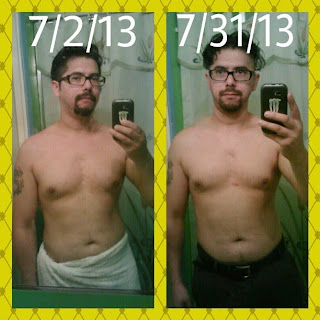 Hey there.  July is done and done.  I took on the month looking to improve my fitness stats.  Last year, I did a pretty good job at keeping myself somewhat fit.  This year... not so much.  My wife has been on a mission to get herself in the best shape possible and it's only fair that I follow suit and support her.  So July was it.  That was the month I was going to get back on track.  Now, it's over and it's time to reap the benefits of my hard work!

This here is my before and after picture.  It looks like I changed my pants and took another picture.  lol  Even though it doesn't seem like there is much of a difference in appearance, I will say that I feel a lot better physically.  I can run for longer distances, I can lift heavier weights, and I can do at least 5 leg lifts now!  lol  I also went from 172 lbs to 169 lbs and according to the BMI handheld thingys, my body fat and BMI fell a few percentage points.  A small victory, but still a victory.  I plan on making a few changes to my workout schedule in the month of August and see I can improve on my fitness stats.


My wife, on the other hand, has been kicking ass.  I won't give any of her stats away, but her before and after picture is pretty awesome.  It just comes to show that when you work hard, you'll start to see the results.  Obviously, I wasn't working as hard as she was.  lol  I'll admit that I was not eating as well as she was.  I still indulged in beer and what not while she made sure that nothing but healthyness went inside her body.  They say that your abs are made in the kitchen.  Well... looks like I need to spend more time in the kitchen and stay away from the chips and beer.  lol

So for the month of August, the wife and I are going to take on the plank challenge.  Have you ever done planks?  They SUCK!  So far, the longest we've been able to hold a plank is for about a minute.  The challenge will ask us to hold a plank for 5 minutes by the end of the month.  5 MINUTES!!!!  It's a great core exercise and judging by my pictures, it'll do me some good.  Even though I started off working out with my wife as a means to spend time with her and to support her fitness goals, it looks like I'm going to start setting some goals of my own. Well, it's August now, and it's time to get to work!  Later!
Posted by Metallman at Friday, August 02, 2013