Hey there. Another month and another Otaku Box! I sure do love me anime stuff! I've always been a fan and I'm just so glad that I'm able to get a box of otaku goodies each month. This month's goodies include items from awesome anime: Fate/Apocrypha, Re: Zero, High School DxD, and Monster Musume. So let's dig into The Otaku Box - August 2020 Edition and get a closer look at what's inside. 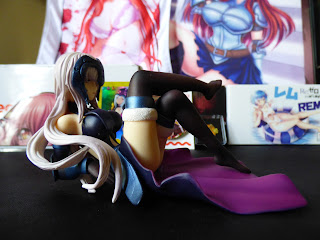 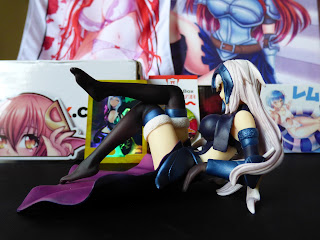 The fate series has no shortage of awesome female characters and though the many forms of Saber may be popular, there's no doubting that Ruler's Jeanne D'Arc would give Artoria Pendragon a run for her money. This Jeanne D'Arc figure is pretty bad ass. Love the color scheme (blue and purple is my second favorite color scheme), the pose, and overall size of the figure. It would have been perfect... if not for her face being covered by her knee. A slight turn of the head would have made her face more visible instead of it hiding behind her knee.
Fairy Tail - Ezra Scarlet Banner (The Otaku Exclusive)
Ezra getting some love this month from the Otaku gods! We all know that Erza is one of the top tier beauties in Fairy Tail but let's now forget she's just as deadly with her sword. This month's fan art really brings out Ezra's beauty while reminding us she's a badass.

It's hot. So, so hot. Summertime in the high desert can be scorching hot too. lol This Rias cooling towel is great to wrap around your neck and keeping yourself cool. You know that Issei probably has tons of these Rias cooling towels lying.

Rem! This is a cool item to include in this month's box, especially since the Re:Zero second season is currently running. I've always enjoyed puzzles so I'll definitely have this one displayed once I put it together.

I really like the idea of this sticker. Miia semi peeking over to see what you're up to is pretty cool. Love it!

Darkness! Konosuba is soooo funny and this Crusader Masochist (Darkness is probably the only one in that class. lol) is a big part of what makes Konosuba so great. This Darkness button showcases more of Darkness' gentle side, but we all know very well what she's thinking!

Anime is not the only medium where otaku can find waifus. This month, League of Legends' Ashe has her moment to shine as top tier waifu! The warmother of the Avarosan Tribe is looking deadly on her waifu card. I can sooooo see her being a top tier tsundere here.

I'm a pirate! Well... not really, but I can pretend! And because I now have a Straw Hat Banner, I can say that I'm part of Luffy's crew! This cool, little banner adorns the Straw Hat logo and is a neat item to display.

What better way to showcase my legendary status than with a pin! This is a cool, little item to show appreciation to long standing members and I just wanted to give a little love back to The Otaku Box for sending these pins. And let's not forget the nifty little box that it comes in. Definitely going to display this bad boy proudly.

And there you have it, folks. The Otaku Box - August 2020 Edition. Man, I've been really loving some of the stuff I've been getting here. Because I am now considered a Legendary Subscriber (being a member for a year or more), I get some extra items in my Otaku Box. Some of the cool stuff that I've received as a legendary sub is a Luffy keychain, Fairy Tail chop sticks, Rias hand fan, and the One Piece Straw Hat Banner. If The Otaku Box sounds like something you want in on, you can get $5 off your first box by using my referral link, here. If you're an anime fan, you're going to want to check it out. And don't forget to tell Liz that Metallman sent ya! Later!