Hey there. I received the July Otaku Box a few weeks ago but I've been a bit busy so I haven't had a chance to write up this post. Until now, that is! I've finally got the pictures taken and I've pretty excited to let you guys know what I got in this month's edition of The Otaku Box. This month's box has some great items from some of my favorite anime: High School DxD, Overlord, Konosuba, and Darling in the Franxx. Let's dig into The Otaku Box - July 2020 Edition and let's take a look at the items! 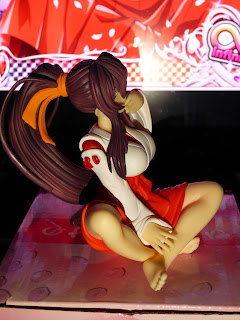 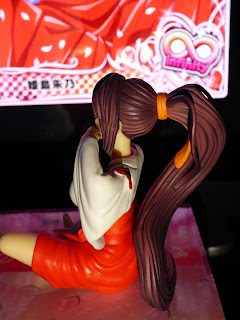 AKENO! If there is any one that rivals Rias in beauty and sheer badassness, it's Akeno. She pulls off the shrine maiden look very well and this figure is going to fit right at home, next to Rias.

The fan art has to be one of my favorite aspects of The Otaku Box and this Moka fan art does not disappoint. The banner highlights Outer Moka in her school uniform. The awesome thing about Moka is that there are 2 sides to her, each with a different personality and look, so we may be able to get artwork of outer Moka some time soon.

I absolutely love Overlord (Albedo is best waifu... fight me!). So I gots plenty happy when I pulled out this bucket hat with the Overlord logo on it. It's super comfortable and perfect headgear for this summer weather!

The second month in a row that The Otaku Box has blessed us with a practical item! Last month we got a face scarf for protection and this month, we got a portable lantern for light. It's a black and red (awesome color scheme) foldable, portable latern with The Otaku Box logo on top. It's scary times right now and having a small lantern in your emergency kit is a smart idea.

Zero Two! Say what you want about the ending of Darling in the Franxx, but there's no denying that one of the best things to come out of the show is this oni-dino girl! Zero Two dons her iconic red plug suit, er... pilot suit, which leaves little to the imagination.

Loving this Waifu Collection Card Series and you can't argue that, Rikka Takarada, this Kaiju fighting beauty, has earned her waifu status. SSSS.Gridman has plenty of awesome characters and there's no doubt that Rikka is top tier.

More Rias goodness from The Otaku Box. This month's extra item for being a Legendary Member is a folding hand fan with Rias' I'd probably just have the fan opened and display it close to my other Highschool DxD items. Good stuff! 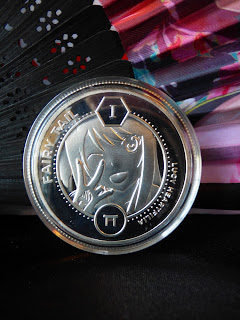 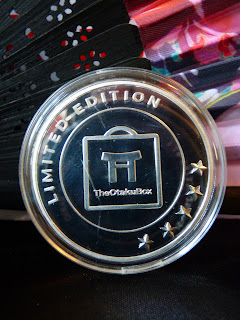 A bonus item?!?! Nani?!?! And it's an amazing one, at that! Just like the Waifu Card Collection series, The Otaku Box has decided to grace us with a series of waifus but this time, on coins! The first coin in this series is adorned with Lucy Heartifila! On one side of the coin, the Otaku Box logo is imprinted, and on the other, the waifu's face, name, series, and coin number. And to top it off, it comes with a great clear, plastic cover to keep your coin safe.

And there you have it, folks. The Otaku Box - July 2020 Edition. Man, I've been really loving some of the stuff I've been getting here. Because I am now considered a Legendary Subscriber (being a member for a year or more), I get some extra items in my Otaku Box. Some of the cool stuff that I've received is a, Bakugo plushie, a Luffy keychain, Fairy Tail chop sticks, and the Rias hand fan. If The Otaku Box sounds like something you want in on, you can get $5 off your first box by using my referral link, here. If you're an anime fan, you're going to want to check it out. And don't forget to tell Liz that Metallman sent ya! Later!