Hey there. I love me some anime! I've been keeping up with most of the latest shows (yes, they are shows to me) and have been a big fan of anime since my high school years. Some of my favorite stuff from recent years is Overlord (Albedo... my favorite), Re: Zero, and Tower of God, to name only a few. So when I found out there is a subscription service that would send me anime stuffs every month, I just had to jump on board. Welcome, The Otaku Box. Liz and her team at The Otaku Box have done an amazing job in getting these cool boxes with anime stuffs out to fans.

Now, I've been a subscriber for some time and I've posted a few of my favorite items that I received on Instagram, but now, I feel it's time to let you in on what comes in a box. Items received could be anything from stickers, acrylic figures, PVC figures, T-shirts, banners, buttons, cards, plushies, and all things otaku!!!  The box is customizable so you can choose whether you want to receive a PVC figure and/or a T shirt.  You can even choose whether or not you receive ecchi stuffs.  I got kids in the house so I opted for the non-ecchi box but if that's your thing, The Otaku Box has you covered! Another thing that I really love about The Otaku Box is that they have exclusive items featuring fan artwork. How cool is that? The artwork is generally featured on T shirts, buttons, and banners and I love the fact that this is stuff that you won'r be able to find anywhere else. So let's dig in The Otaku Box - June 2020 Edition and let's see what we got! 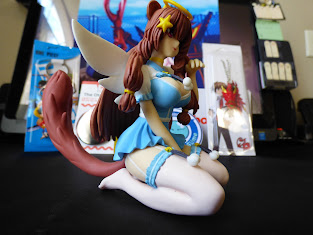 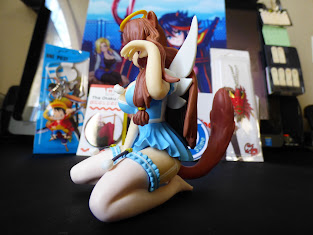 Ooooo... Raphtalia. And she's dressed up as an angel. I received a Raphtalia figure a few months back but I'm not surprised that we see Raphtalia again so quickly. This month's figure stands at about 4 inches so it's a nice sized figure. She has a bit of a suggestive pose, sitting on her knees, wearing thigh highs, showing a come hither hand, all while giving off that cute tanuki vibe. Absolutely loving it.

The banner usually showcases fan artwork and this month's Otaku Box features Ryuko from Kill la Kill. Kill la Kill was such a fun show to watch. Studio Trigger really went off the rails with this one. Ryuko went head to head with some very unique characters in some pretty intense battles. This artwork captures Ryuko taking a seat while having a break from the action.

Android 18 is definitely a fan favorite of Dragonball Z and in this month's box, see comes in acrylic form. The acrylic figure stands a little over 4.5 inches and features Android 18 in her iconic outfit. Damn that lucky Krillin... lol

That Time I Got Reincarnated as a Slime - Rimuru Patch

Fun Rimuru patch! That Time I Got Reincarnated as a Slime was a surprise hit from last year and what better way to show your love for the show and Rimuru Tempest than with this awesome patch. It's a pretty simple patch, Rimuru in slime form in the middle and the name of the show circling. Nothing flashy, but nevertheless, awesome.

BOOST! Oh man, I can hear the Red Dragon now. This is a pretty cool necklace and I like to hang these up rather than wear them. But hey... maybe you can channel your inner Issei Hyoudou and show off your dragon gauntlet necklace in style. Who knows... maybe a lovely lady like Rias may take notice. lol

Exclusive fan art of Edelgard! I'm telling you, this fan art is pretty cool and having them in button form is pretty cool. I pin these buttons on a banner to show off and having the princess, Edelgard, in my collection will definitely class it up a bit.

ALBEDO!!! I love me some Albedo. One of my favorite characters in Overlord and definitely a top tier waifu. The Otaku Box started adding these pretty neat cards, featuring an awesome waifu. On the back of the card is a quote from the waifu, a little bit of backgroud info, and some trivia (I didn't know that Albedo was latin for whiteness).

And there you have it, folks. The Otaku Box - June 2020 Edition. Man, I've been really loving some of the stuff I've been getting here. Because I am now considered a Legendary Subscriber (being a member for a year or more), I get some extra items in my Otaku Box. Some of the cool stuff that I've received is a bento box, a goku bottle opener, Bakugo plushie, and a Luffy keychain. If The Otaku Box sounds like something you want in on, you can get $5 off your first box by using my referral link, here. If you're an anime fan, you're going to want to check it out. And don't forget to tell Liz that Metallman sent ya! Later!