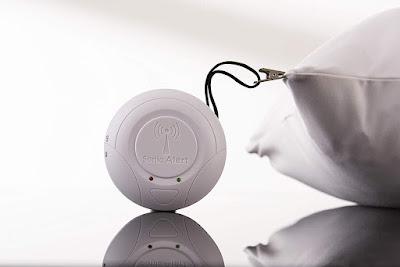 Hey there. It's been awhile since I've done a review. It's not that there are a lack of products, it's more like a lack of time. Working and going to school full time (that's right, I'm college bound, baby!) has really taken a bite out of my free time. That, and the fact that I haven't been able to get myself into a steady sleep schedule. I'm one of those guys that have an alarm for the back alarm for the back up alarm. Yeah... I sometimes go through 3 alarms in the morning and sometimes, I don't even hear them. And it doesn't help that my alarms are pretty loud and will wake everyone but me. I tend to get up only after my wife nudges me and tells me that my alarm is going off. I feel bad when this happens. I get up at 4 in the morning (when I actually get up with my alarm) and my wife doesn't need to get up until 7 so I feel horrible when I get my wife up unnecessarily. Well, I may have just found a solution. Our good friends at Sonic Alert have provided me with the Sonic Bomb: The Vibrating Alarm. Now this thing is pretty cool. Essentially, it's a vibrating alarm that you can clip to yourself, your pillow, or somewhere close to you on your bed and when your alarm goes off, the Sonic Bomb goes off, shaking the crap out of itself to wake you up. It's a very unique concept and an experience that is unforgettable. But before I get into my experience with the Sonic Bomb, let's talk Specs!

First off, the box for the Sonic Bomb is super informative. It clearly lays outs the features and functions of the Sonic Bomb and also has the Google Play and Apple store logos on display. Just by reading the box, you should already have a good idea of what the Sonic Bomb does. The only downside is that the box does not give you an image of the Sonic Bomb itself. But overall, a nice first impression.


First things first, charging up. Out of the box to full charge, no more than 20 minutes. Not bad. Not bad at all. Once it was fully charged up, I went onto my phone and downloaded the Sonic Bomb app. YOU WILL NEED THE APP TO USE YOUR SONIC BOMB. Once you download the app, the app provides you with the instructions on how to connect to your Sonic Bomb, but here's a quick run down of how to do it. You open the app, you turn on your Sonic Bomb, you click on Connect on the app, and you wait a few seconds for the app to connect. It's that easy. Once you are connected, the Sonic Bomb on your app will be colored in and the status will say connected. Another cool thing about the app is that is does display the battery life of your Sonic Bomb so you'll be aware of when it's time to recharge. So let's get into some functionalities.

Using the app, you can go into the Set Up or Alarm menus. Let's start with the Alarm menu first. Here you can set up your Sonic Bomb to go off at a specified time and day of the week. By clicking on options, you can also adjust the strength of the vibration, the alarm duration, vibrate pattern, toggle Snooze on and off, Name your alarm, and toggle whether you want your phone alarm to sound when the Sonic Bomb goes off. A big plus to this menu is the ability to test the sonic bomb device using the options you selected. This gives you a clear picture of what is going to happen when your Sonic Bomb goes off and if you're not happy with it, you can adjust the settings until you are content. Well done, Sonic Alert!

Using the Set Up menu, you can use the app to have the Sonic Bomb go off when you get an Email, call, or text messages. Now... I don't see the practicality of having the bomb go off every time you receive a call, text, or Email. The only way I see this being a thing for you is if you have trouble hearing, and considering that Sonic Alert has been making products for those with difficulty hearing, it would make perfect sense that Sonic Alert had this function in mind for those individuals.

Once all is set up and ready to go, I put the Sonic Bomb to the test. I am a heavy sleeper so I was extremely curious as to whether this vibrating alarm would actually wake me. I ended up clipping the Sonic Bomb to my pillow and went to sleep. When my alarm went off in the morning, I literally jumped out of bed. lol The vibrations startled me and got me to jolt up right away. I got up and was wide awake, that's the good part. The bad part is that I got up so quickly that I ended up startling my wife and woke her up as well. It took a few nights of me adjusting the vibrations to where they were strong enough to wake me, but not strong enough to jolt me out of bed. Nevertheless, the Sonic Bomb does what it sets out to do and does it well!

The Sonic Bomb by Sonic Alert has surpassed my expectations. As a heavy sleeper, I found it hard to believe that this small device would be able to get me up in the middle of the morning, but sure enough it did. There really isn't much more to say other than the Sonic Bomb does it's job and does it well. If you want to experience the Sonic Bomb for yourself, you can pick up one of these bad boys at Amazon and if you hurry, you might be able to snag it at a 20% discount!

If you sleep through your alarms or if you simply have a hard time hearing your alarms, the Sonic Bomb by Sonic Alert may be what you need! Check it out and make sure never to miss an alarm again! Later!