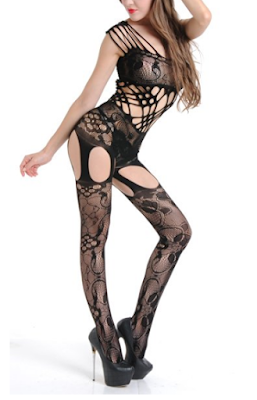 Hey there.  Who doesn't like to have a little fun in the bedroom, right?  After being married for over 10 years, the wife and I open to try new things to keep that fire of passion burning brightly.  This time around, we found ourselves going with something that you can wear.  Something that is edgy.  Something that screams, "us".  This Honenna Women Sexy Lace Lingerie Fishnet Bodysuit is just that!  My wife has always been a big fan of fishnet stuffs and when I saw this fishnet bodysuit, I knew that she just had to have it.  Before we get into our experience, let's talk specs:

SPECS
CONTENTS
Package received was discreet, so if you're worried about the postal worker knowing about your business, you're covered there.  The lace bodysuit comes in a plastic bag, similar to those that leggings come in.  Once we pulled them out of the bag, my wife instantly feared that there may be a slight problem with the size.  The product states that this is a "one size fits most" and my wife, being 5'9", figured that she would fall in the most crowd but the fishnet bodysuit looked small.  Hmmm...
My wife pulled and stretched it open and slipped right into it.  She was pleasantly surprised that the fishnet mesh material is super soft and stretchy.  It is not stiff at all and she was afraid that it would rip when being pulled, like other fishnet stuffs that she's owned before, but this Honenna fishnet bodysuit held up real well to the stretching and pulling.  Also, being a fishnet bodysuit, you would figure that you would stumble getting into it, being all holey and all, but no... my wife had absolutely no problem slipping it right on.  That's pretty cool if you ask me.  The last thing you want is something difficult to get into.  It may end up killing the mood if your partner is frustrated because she struggled to get the bodysuit on.

As for the design, it is super sexy if you are into that mesh/fishnet design.  It has a real edgy look that is right up our alley.  Also, it looks real good against the skin.  My wife was worried that the fishnet may create, "rolls", by digging into her skin.  That was definitely not the case here!  Our best guess is because the bodysuit is so soft and stretchy, it avoids digging into the skin, creating a more appealing visual.  Great job, Honenna!

Lastly, the size... I mentioned that my wife thought it would be too small for her. Well... it was slightly small, and I do mean slightly, BUT, that doesn't mean you can't make it work. We noticed that the garter belt was a little on the lower side of the waist, so we concluded that the bodysuit would fit best on a shorter woman, or a woman that doesn't have very long legs. It's definitely not a deal breaker, but we believe that if you're closer to 6 feet tall, it may not fit very well. Other than that, everything else fit very well and we are super happy with it.

Spice things up in the bedroom with this Honenna Women Sexy Lace Lingerie Fishnet Bodysuit. It's super easy to slip on, it's super soft to the touch, and it's pretty awesome to look at once your partner has it on. The best part? It doesn't cost an arm and a leg! You can pick one up now for under $12 at Amazon!