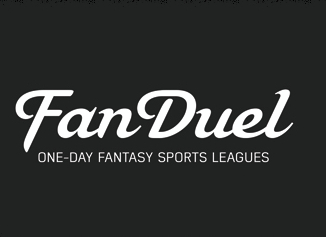 Hey there.  Week 5 is in the books and another exciting NFL week has come and gone.  I offered a few value picks for FanDuel last week to help your lineups and not all of them panned out.  Specifically, the Giants D.  I had them pegged for a cool 14 points and they ended up only getting 2.  Colin Kaepernick decided to show up and play and the Giants just couldn't pressure him into bad throws.  The others did faitly well, though.  James Jones 14.7 points (I predicted 18) on only 2 catches, Todd Gurley didn't find the end zone, but netted 15.9 points (I predicted 16) and Allen Hurns came up big with 20.1 points.  Anyways... after placing my team and entering the $1 single entry tourney, I came up a loser.  The streak ended at 2 wins in a row but man, was I ever so close!  I needed 142.30 points to come up a winner and I ended up with 141.60.  I missed out by less than a point!!!  So far this season I'm 2 and 3.  I've put in $5 and I've won $9.  Here is my oh so close line up for week 5: 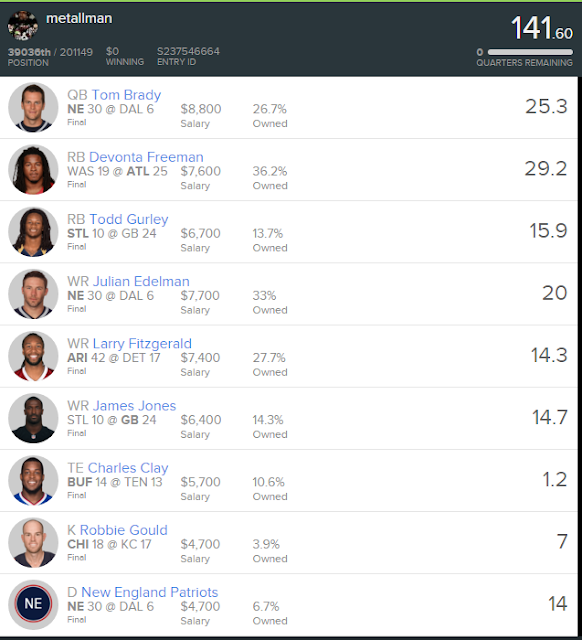 Devonta Freeman has just had an unbelievable streak right now.  He's scored above 29 for the last 3 weeks.  I'll continue to ride the hot hand until he comes down to Earth.  Also, Brady has averaged about 25 points a game this season.  The man is on a mission and he's definitely paying dividends to fantasy owners.  The only that really didn't pan out for me was Buffalo Bills TE Charles Clay.  I figured that he would be more involved in the passing game but he was practically nonexistent the whole game.  I can say for sure that I can pin this loss to this poor player selection.


Now, it's time to focus on week 6.  Keep in mind, value players are players with a low price tag that can potentially get you big points while allowing you the cap space to pick up a top tier player.  I haven't set my squad just yet but here's a couple of value players that I am considering putting on the team:

The Chargers are up against a pretty good Green Bay defense so I expect San Diego QB Philip Rivers to check down to his 2nd and 3rd options on pass plays.  Woodhead is a safe bet to benefit from those dink and dunk passes when Rivers is pressured.  I say Woodhead finds the end zone at least once and gets 15 points.

James Jones continues to put up good fantasy points and he's still under $7,000.  It's almost as if the whole world expects him to come back to Earth and have a horrible game.  He has scored in double digits in 4 out of the last 5 weeks and I see him continuing that streak against the Chargers.  Pencil him in for 14 points.

This guy...  He's been under the radar simply because he plays for the Browns, but he has put up some impressive numbers as of late.  He's score a touchdown in each of the last 3 games and he's put up 100 yards in 2 of those games.  I know that the Broncos defense is stingy so they'll definitely take out the big plays down the sideline away from QB Josh McCown.  That means he'll have to check down and check down often which will leave Barnidge open for a productive day.  I say he nets at least 16 points this week against the Broncos.


So there are a few value picks that you may want to consider.  There are many Fantasy Football websites out there but I really like FanDuel the most.  If you haven't signed up, do so here.  Use promo code FB35 for a free entry to a cash game!  Good luck friends!  Hope we all are a little richer when we catch up next week!  Later!

Posted by Metallman at Wednesday, October 14, 2015