Hey there. I love external battery packs.  I take my trusty battery packs everywhere I go but one of the complaints that I have about them is that if they are not charged, they are of no use.  I need one that will harness the power of the sun!  I need something like this Solar Panel Charger Portable Power Bank by ZhiZhu!  Our good friends at ZhiZhu sent me this one of a kind battery pack to try out and review.  But before I go into my experience with this solar powered battery pack, let's talk specs.
This is a great emergency solar powered battery pack. You can charge it up, like other external battery packs, via MicroUSB cable but because of the solar panels, you can also use it as an emergency battery pack when out and about! As an added bonus, the battery pack is also shock, dust, and water proof. That's perfect when going out to sandy areas, such as a beach or lake, great for when you off on a hike, and tough enough to withstand bumps and drops. 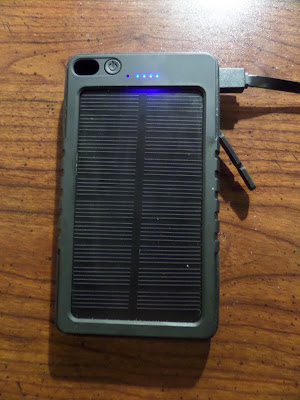 I tested out the Solar panel Charger while out on a hike. I thought it would be a great way to test its durability and it's dust proof claim, since going out on a trail usually has a rough terrain with dirt flying everywhere. I did have the Solar Panel Charger hooked up to the outside of my backpack so that it can get some sun and be exposed to the elements. While out on my trip and settled for some water, I pulled out the Solar Panel Charger to give it a test run. First thoughts... the soft rubber edges really helps with grip and will absorb many bumps and drops. I thought that this was great since I was expecting my running to cause the battery pack to flop around and take a few hits. Also, I was able to wipe away any dust with relative ease. Plus and plus. I also noticed that whenever the device is charging via solar power, a little green light will come on. If the device is getting a full blast of sun, the light will be bright green. If moving to a more shaded area, the green light will dim a bit. I thought that was pretty cool. At a glance, you can tell whether or not you're getting a enough sun for a good charge. Also, aside from the green light, there are 4 blue lights that will indicate how much charge is stored. Each light represents about 25% charge so if only 2 lights come on, then you'll looking at about 50% fully charged up.

The Solar Panel Charger is a 8000 mAh capacity battery pack so it can hold enough of a charge to power up most devices... or so I thought. This worked great to charge up my Samsung Galaxy phone and my Bluetooth speaker, but it will not charge up my Kindle Fire. The output is a measly 1.0A and that, in my opinion, is a low charging output. Works well for smaller devices but nowhere good enough for tablets or high powered devices. Not a deal breaker, but it's something to keep in mind.

And lastly, I think that this serves best as an emergency battery pack. I noticed that when I had it out in the sun to charge up, it would take quite awhile for it charge up. I let it sit in the sun for about an hour and only got one additional blue light to come on (about 25% charge). This is a far cry of the efficiency of using the USB cable. I was able to charge it from dead to 100% in a little over an hour. Again, the Solar Panel Charger is great if are going to be outside for long periods of time to allow it to fully charge or for cases of emergencies where the sun in your only source of power. And just to add another safety measure, the Solar Panel Charger also has a built in light. Perfect for finding your way around a campfire at night. Simply press the power button twice to get the light to come on and pressing it a third time will get the light to repeatedly blink. The blinking feature is absolutely perfect if you ended up lost or needed to bring some attention to your location. 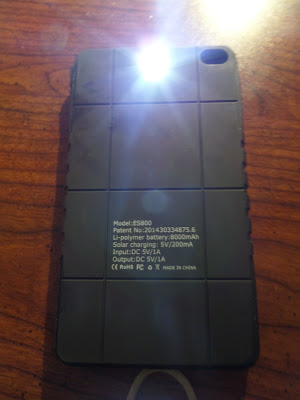 Since I live in sunny Southern California, I can see myself taking this out to the beach. We live in a would where we all take our cellphones everywhere and if I have a battery pack that can be powered by the sun, why not take it where I know it will get plenty of it? Now, the device claims that it is water proof as well. I'm not going to lie, folks, I DID NOT TEST THIS. I've have a few devices crap out on me because they claim that they are water proof and then I find out that it's a bunch of crap. A few droplets of water did land on the solar panels (by accident) and I was able to wipe them off without a hitch but I cannot speak more on the water proof claims. So far, my device is still working so there may be some truth to it. Again, if you are an active person or just one that is out and about a lot, I would seriously consider this Solar Panel Charger. Though the output is only 1.0A, it is good enough to charge up practically any cell phone. And at the end of the day, if you are in a pinch, that solar power is all you have, this is going to save your butt.  You can pick one up right now at Amazon for under $24.  Small price when the solar power is unlimited!  Grab one today, friends!  Later!