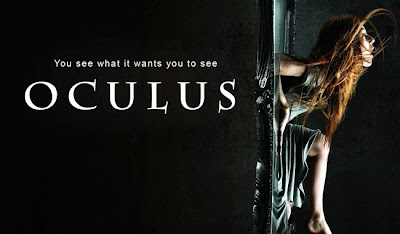 Hey there.  I love horror flicks.  I am intrigued by the supernatural.  I think that Amy Pond, er... Karen Gillan, is awesome.  So when I find out that there is film out there that combines all three, I just had to check it out!  In a nutshell, Oculus is a film about a mirror and some spooky stuff that goes around because of it.  Brother and sister, Tim and Kaylie, vow to destroy it once and for all.  But can they get it done before the mirror does its spooky stuff on them???  Story doesn't sound original, but it does look intriguing, so when I found the film at my local Redbox, I couldn't resist.  I haven't done a Thoughts on post in a while so let's just lay out the ground rules before I get into it.  THIS IS NOT A REVIEW.  This is merely some thoughts and observations that I made while watching the film.  Also, I will speak candidly of the film so there will be spoilers.  If you haven't seen it, go see it now and then come back and check out this post.  Now, my thoughts on... Oculus.


Oculus first caught my eye when the commercials were running for its theater release some time in 2013.  I remember watching TV with my daughter and when Karen's face came on screen, we both went, "That's Amy!"  lol  Karen's best known for her role as Amy Pond on Dr. Who and we were in the midst of binge watching the show so we were a bit shocked to see her on something that was not Dr. Who.  Anyways, I don't know any of Karen's other work so I was curious to see just how well she would do in a feature film.

First off... the mirror.  A scary movie about a mirror...  Didn't we already cover this?  I think the name of that film is... ugh... MIRRORS.  lol  I think I did a post about it.  I'll have to go through the archives and find out if I did or not.  Anyways, there's something odd about mirrors.  Something about them just screams supernatural.  Whenever I look into one, I see my reflection but I know it's not me.  Like something's not right.  Maybe I played one too many Silent Hill games that I don't trust mirrors.  lol  Or maybe we are all born with this innate sense to catch things when they seem off.  It's unsettling.  Now I'm not saying that all mirrors are evil or possess some kind of supernatural spirit or whatever.  It was believed, probably still by some, that the mirror not only reflected your physical appearance but your soul as well and breaking the mirror would be the equivalent of shattering your soul.  Whether that's more than enough to conjure up the hell spawns of Satan and wreck havoc in your life is another story.  I think that films about mirrors plays on this feeling and may be why I'm drawn to stories about mirrors.  As for the story...

The storytelling is what really sets Oculus apart from other films in the horror/supernatural genre.  There are two stories being told at once: the story of a young Tim and Kaylie first encountering the mirror and a older Tim and Kaylie attempting to prove that the mirror is possessed and then destroy it.  The film jumps between both stories fairly well.  In the young Tim and Kaylie timeline, we see the effect of the mirror on their dad.  You see him slowly go mad.  You see effect that the mirror has their mother.  Knowing he way the mirror distorts her reality and the way the mirror seduces him, gives you a very clear picture from where the Kaylie's angst comes from.  And that's the second story being told.  In the older Kaylie and Tim timeline, Kaylie wants to destroy the mirror, but before she does, she wants to show the world that the mirror is possessed and caused her father to do the things he did.  The movie takes you through both story lines at the same time.  There are even points in the film where the stories seem to go on at the same time.  You question whether or not young Tim really does see older Tim in his room.  You question whether the mirror is playing tricks on the characters or if that's what really happened.  And that's why the story telling works so well.  The audience is put into the characters shoes.  If we don't know what's real and what isn't, how are the characters supposed to know?  We question what we see and hear just as the characters do.  Taking you for that ride is a welcomed change to the genre.

Oculus is unique and may not be for everyone.  Most "scary" movies have multiple jump scares or bloody, gory scenes.  This film does not.  But that doesn't mean it doesn't have it's cringe worthy shots.  Throughout the film, the mirror alters reality for the characters. They don't know what's real and what's not.  What they see, may not be real, what they hear but not be there.  They simply do not know and even though Kaylie tries to set up Kaylie biting into the light bulb... that made me cringe.  But you know what, you don't actually see her biting into it.  You hear the cracking, you see the aftermath, but the act itself is not shown on screen.  There is also another scene where the mom is in front of the mirror and is compelled to slice open her stomach.  Again, you don't see the act, but you know that's what she's doing.  That, I absolutely love.  Let my mind picture it.  Let my minds eye visualize what would be cringe worthy to me.  And it works.  Your brain is a lot more effective at creating that gruesome scene.
And because this is a horror film, there are some pretty questionable decisions made by the characters, but there is really one that irks me.  Tim and Kaylie promise to destroy the mirror when they are older.  So once Kaylie obtains the mirror, why not destroy the crap out it?  Well, she explains that the mirror has defenses that will disarm anyone trying to destroy it.  You see this defense in action when, as kids, they try to smash the mirror with golf clubs and miss the mirror on each swing.  To counter this, Kaylie built a kill switch that's rigged to a swinging blade that will swing full force right into the mirror, smashing it.  In essence, it's a great idea.  But the problem I had is why not smash it right away?  I get it, you want to clear your dad's name, but knowing that the mirror will make you see things and affect your perception, why take the risk of falling under it's influence?  And guess what...  That's exactly what happens!  If I were Kaylie, I would have flicked that kill switch the moment I noticed something was weird.  And she noticed it... and instead, decided to mess around some more.  Tim, was dragged along and when he finally decided to smash the mirror with the kill switch blade, it was already too late.  They were already under the mirror's spell.  Tim got up and noticed that he was alone in the mirror... but in reality, he wasn't.  The mirror guided Kaylie to the mirror used Kaylie as a shield.  Tim couldn't see Kaylie and he flicked the switch, the blade impaled Kaylie right in the back of her neck, saving the mirror from harm.  And because Kaylie sets up 3 cameras on the mirror so that what really happens is recorded, since they can't trust what they see, the "murder" is caught and recorded by the laptop.  Now... Tim, once again, gets carried away by the cops, while he screams that the mirror did it.
The second decision faceplam moment for me was practically everything that Kaylie does AFTER she realizes that she can use her phone's video camera to verify that what she sees is real.  Kaylie was was unsure of what was real and what wasn't.  Her dead mother and father appeared to her, attempting to kill Kaylie and Tim.  The plate that her mother ate out of was smashed and Kaylie ended up with a piece of the plate in her hand and was branding it as a weapon.  When Kaylie's fiances appears out of nowhere, Kaylie ends up stabbing him in the neck.  Tim sees this and Kaylie is unfazed, believing that it's the mirror messing with her head to break her.  Using her phone's camera, she confirms that the fiance is real and she just killed him.  What about the piece of plate?  Shouldn't that be fake?  Well... Kaylie saw a piece of the ceramic plate in her hand but in reality, she was holding a sharp piece of a ceramic pot that she smashed earlier in frustration.  After this... tell me why Kaylie and Tim just don't walk around with their cell phones out so that they can verify what is real and what isn't?  They completely abandon it!  I would've used my phone EXCLUSIVELY as my eyes once I realized that what the screen shows is what's real.  Why they didn't, is beyond me!

No movie is perfect, but I really did enjoy Oculus.  There are only so many vampires, monsters, and scary things that you can reuse to make a horror film.  I love it when a story comes out and attempts to change it up a bit.  Though a possessed mirror is not original, the story is told in such a way that it keeps you intrigued.  The story moves along well and there really isn't a slow part in the film.  Switching between the past and present is extremely well done and the film gets MAJOR points when you, as the audience, is experiencing what the characters experience when you are unsure whether or not both timelines are running concurrently.  That was a very nice touch!  If you are looking for a film with a refreshing take on the horror genre, go watch Oculus.  It's not a great film, but it's not bad either.  It's entertaining and that should be enough to go and check it out.  And if nothing else... Karen Gillan!  C'mon, you can't go wrong when Amy Pond is involved!  lol

So, what did you think of the movie?  Love it or hate it, I want to hear from you, friends!  Later!

Posted by Metallman at Wednesday, November 12, 2014