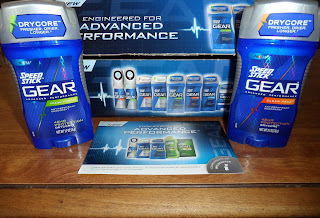 Hey there.  There are many deodorants out there on the market.  And let's not kid ourselves, some of the ads and commercials for those deodorants can be quite persuasive.  But you know what... Nothing speaks more than actually trying out the product.  That's why I was pretty excited about receiving the SpeedStick GEAR VoxBox from our good friends at Influenster.  I've seen and heard about it and even caught a commercial or two about its 24 hour protection, but I never got around to trying out a stick.  There's no excuse now!  The Speed Stick GEAR VoxBox provided me with 2 Speed Stick GEAR deodorant with drycore technology.  After switching it out with my regular deodorant stick for about 2 weeks, I can now give you guys some feedback as to how awesome this antiperspirant is.

First off, let's not kid ourselves... the deodorant you use makes a huge difference.  HUGE!  Some are good for an active lifestyle, others are good for a few hours at a time, others are also an antiperspirant, while others simply mask your sweaty scent.  There is a deodorant stick out there for everyone.  Finding that deodorant stick can be quite a task.  I've tried many deodorants in my lifetime and I can honestly say that this Speed Stick GEAR antiperspirant is now my favorite.  Not only does it help me smell fresh, it also offers 48 hr protection.  48 HRS!  And guess what?  It lives up to it's claim.  After using it for about a week and being quite satisfied with its daily protection, I decided to test the 48 hour protection claim and find out for myself whether or not it was the real deal.  I hit the gym about 5 times a week and I decided to test it during the 48 hour claim during the weekend.  After my Saturday gym session, my wife and I noticed that my underarms were fairly dry.  Not bad.  After my Sunday gym session, my wife and I were surprised that my underarms were still dry.  But that's not the only thing we noticed... we also noticed that my noticeable musk smell was not as strong.  We figured that it wasn't entirely gone because my whole body produces sweat and the musk smell must have been emanating from other parts of my body.

So what do you look for in sweat protection?  What's more important to you?  Dryness or odor protection?  Have any of you tried the Speed Stick GEAR line?  What did you think of it?  Let's hear it, friends!  Later!

I received these products complimentary from Influenster for testing purposes.