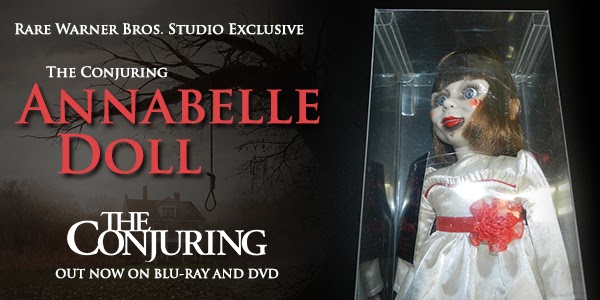 Hey there. Have you guys seen The Conjuring yet? If you haven't, you need to hurry and enter the giveaway I am running for the movie now! If you have seen the film or already own it, then you need to check out THIS giveaway! You see that? That's the Annabelle doll from the movie... and I'm giving one away to one of you fine Metallman readers! Our good friends at PartnersHub and Warner Bros. have provided me with a rare Warner Bros. Studio exclusive Annabelle doll to give away. How creepy is that doll? How creepy was it in the movie? And to think, the Annabelle doll in the film is inspired by an actual doll that is possessed! This is a must have for any horror fans out there. Now, on to a few fun facts about the film.

1) The Conjuring is directed by the acclaimed James Wan, the Australian-born director of the fright-fests Insidious and the Saw series. His Twitter handle is @CreepyPuppet. Say no more.
2) The Conjuring has been given an “R” rating by the MPAA. Not because of blood, gore, or violence, but simply because it’s just so scary from start to finish!
3) The Conjuring’s cast and crew experienced creepy events during filming. Scratches appeared out of nowhere on Vera Farmiga’s computer soon after she agreed to act in the movie, the crew were routinely woken by something in the “witching hour” between 3 and 4AM, and the real-life Carolyn Perron fell and broke her hip while visiting the set.
4) The Rhode Island farmhouse where The Conjuring is set once belonged to an accused witch, Bathsheba, who tried to sacrifice her children to the devil and killed herself in 1863.
5) Hold your applause! The Conjuring will make you terrified to clap! Whether it’s playing a traditional game of hide-and-seek by following the clapping sounds like the mother and daughter in the movie, or being terrorized by ghostly claps in different rooms of the haunted farmhouse, these claps throughout the movie will give you the creeps!


Pretty awesome, no? And now, the giveaway rules. The giveaway will run from now until Nov. 13th.  To enter the giveaway, use the rafflecopter widget and leave a comment answering the question below. That's it. Gain extra entries and increase your chance of winning by sharing on various social media outlets. Also, the giveaway is open to US and CAN residents only. Winner must have a residential address. Prize will be sent via FedEx or USPS. Sorry no PO Boxes. Each household is only eligible to win 1 The Conjuring Annabelle Doll via blog reviews and giveaways. Only one entrant per mailing address per giveaway. If you have won the same prize on another blog, you will not be eligible to win it again. Winner is subject to eligibility verification.

To enter to win the Annabelle Doll, you must use the widget below AND leave a comment answering this question: Which is the scariest doll in film and why? Is it Annabelle? The puppets from Puppet Master? Any doll in Dolls?  Chucky, perhaps? Let's hear it friends! Good luck! Later!

Posted by Metallman at Wednesday, October 30, 2013