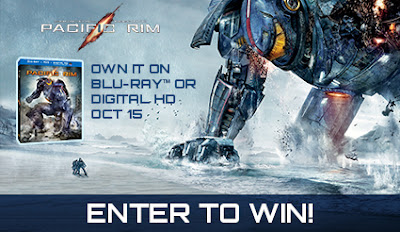 Hey there.  PACIFIC RIM!!!!  Have you guys seen this movie yet?  No?  It is freakin' awesome!  I simply love Guillermo del Toro's film and his latest definitely ranks up there as one of his best!  And guess what?  You can win Pacific Rim on Blu Ray right here on Metallman's Reverie!  Yup!  Pacific Rim is availble for purchase on Oct. 15th, and our good friends at PartnersHub are provide me with a copy of Pacific Rim on Blu Ray to give to one of you!  How awesome is that?  If you are not familiar with the film, let me fill you in.

Directed by Guillermo del Toro, Pacific Rim is an epic science fiction film set in the 2020s. Earth is at war with Kaijus; colossal monsters from an inter-dimensional gateway on the Pacific Ocean floor. Humanity unites to fight these huge monsters by creating the Jaegers: gigantic humanoid robots that are controlled by two pilots whose minds and memories are linked. The story takes place in the later days of the war, following Raleigh Becket, a former Jaeger pilot called out of retirement and paired up with newbie pilot Mako Mori in a final effort to defeat the Kaijus!


And if you still not sure what the movie is about, check out the trailer.

Pretty awesome, no?  Everyone that is familiar with Guillermo's work knows that the man has great vision and can make stories come to life on the big screen.  Pacific Rim offers Guillermo the chance to work with larger than life robots and what he portrays on the screen is simply amazing!  I can't stress enough how awesome of a film this is and I'm excited to be able to provide this giveaway to you guys!  Now, for the giveaway details.

As always, all I ask is for a little reader interaction.  The Pacific Rim app offers awesome controllable gifs to view, a great soundboard to listen to, and a superfan quiz to test yourself with.  To enter the giveaway, use the widget and leave a comment with your results of the superfan quiz OR leave a comment with your favorite sound bite or gif.  That's it.  Gain extra entries and increase your chance of winning by sharing on various social media outlets.  Also, the giveaway is open to US and CAN residents.  Winner must have a residential address.  Prize will be sent via FedEx or USPS.  Sorry no PO Boxes.   Each household is only eligible to win 1 Pacific Rim Blu-Ray via blog reviews and giveaways. Only one entrant per mailing address per giveaway. If you have won the same prize on another blog, you will not be eligible to win it again. Winner is subject to eligibility verification.

So much awesomeness! The giveaway will run from now until October 25th and winner will be announced on the 26th. Good luck!!!
a Rafflecopter giveaway
Posted by Metallman at Thursday, October 10, 2013