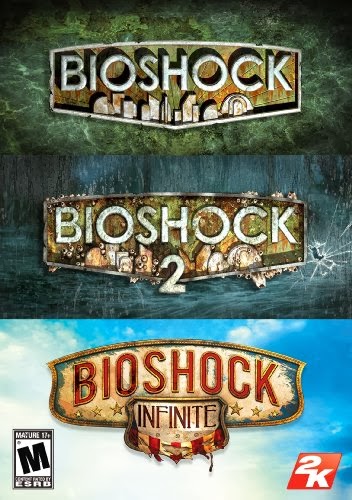 Hey there.  Bioshock... I love the hell out of that series.  I've been a fan ever since the first Bioshock game and I've followed the series as it's progressed into the much praised Bioshock Infinite.  So, when I saw that Amazon was having a deal where you can get all three Bioshock games for $20, I damn near fell off my chair!  lol  You know that deals on Amazon come and go so if you want to try your luck and see if it's still gonig on, you can click on the Bioshock banner above and check.  But if it is gone... NO WORRIES!  Metallman has your back!  I'm going to give away the Steam codes for all three games right here, right now!  It's giveaway time, folks!


I'm not gonig to bore you with the details of the games.  You're here because you know what's up and you want to win.  So let's get right into the giveaway details.  The giveaway is open to anyone and everyone everywhere.  YOU MUST HAVE A STEAM ACCOUNT IN ORDER TO REDEEM THE CODES. I can't stress that enough, people! Giveaway is going to run from now until Oct. 6th and the winner will be announced the following day.  Good luck, friends!  Later!
a Rafflecopter giveaway