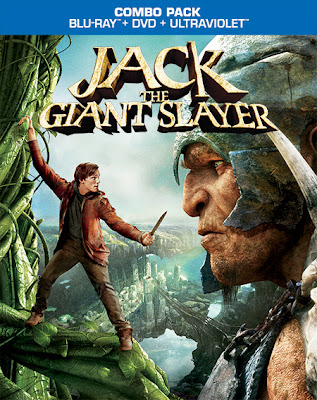 Hey there.  Who's ready for another movie giveaway?  Our good friends at Partners Hub and Warner Bros. have provided me a Blu Ray/DVD/UV movie combo pack of Jack the Giant Slayer to give away to one of you fine Metallman readers!  For those of you that are not familiar with the film, Jack the Giant Slayer is a revamped telling of Jack and the Beanstalk. Jack climbs up, battles giants, and saves the day.  Of course, the story has been modernized to appeal to today's audience!  The film is set to be released for purchase on June 18th, and you can score one of the first copies of the film right here on Metallman's Reverie!  Here is the synopsis of the film:


Unleashed on the Earth for the first time in centuries, the giants strive to reclaim the land they once lost, forcing Jack (Nicholas Hoult), into the battle of this life to stop them. Fighting for a kingdom and its people, and the love of a brave princess, he comes face to face with the unstoppable warriors he thought only existed in legend... and gets the chance to become a legend himself! Directed by Brian Singer (X-Men, Superman Returns)

As always, all I ask is for a little reader interaction.  Many of us have heard of Jack and the Beanstalk as kids.  As a mandatory entry, leave a comment letting me know which fairy tale you would like to receive the Jack and the Beanstalk treatment.  Then, check out this awesome Jack the Giant Slayer App.  The app has some pretty cool features too!  You can control the action with your mouse, you can check out the sounds of Giants, and you take a quiz to see if you are as brave as Jack!  Make sure to check it out!

Now, for the giveaway details.  The giveaway will run from now until July 7th and the winner will be announced on July 8th.  The giveaway is open to US and CAN residents only.  If the winner is from Canada, you may be asked to pay for additional shipping costs.  Please keep that in mind before entering.  Prize can only be shipped to residential addresses.  Sorry, no PO boxes. Good luck, friends! Later!

a Rafflecopter giveaway
Posted by Metallman at Monday, June 17, 2013