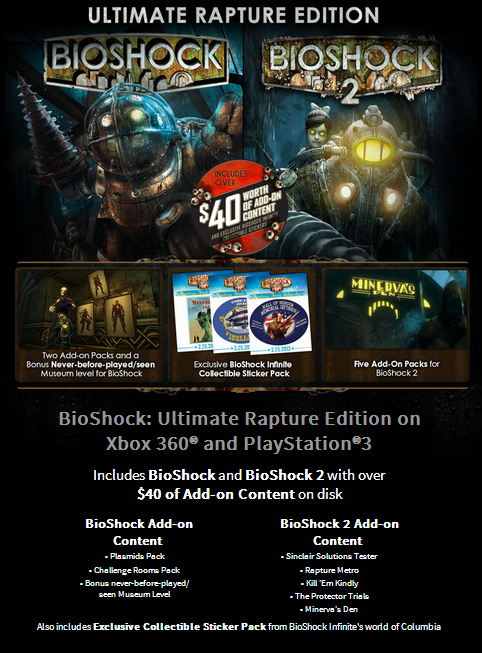 Hey there.  It's time for another giveaway!  But this is one is going to be a little different the others I've had.  I've been in Bioshock mode for the past few weeks.  I've been playing Bioshock Inifinte and it's been one hell of a ride!  I promised the kids that they can watch me play, since they've seen me play the first two Bioshock games and have an interest in the Bioshock series.  Last night, I finally got through the game and it brought a smile that my 14 and 11 year old were discussing the possible meaning of the ending.  Anyways, I decided that this giveaway will be Bioshock related and I've come across 2 prizes that should make anyone who loves the Bioshock series happy.  The prizes up for grabs are the Bioshock Ultimate Rapture Edition OR The Art of Bioshock Infinite Hardcover Book!  The winner will get to decide which on the prizes they would like!

The Bioshock Ultimate Rapture Edition is the first two Bioshock games PLUS their downloadable content.  That's $40 worth of DLC!  The Ultimate Rapture is available only for the PS3 and Xbox 360 (sorry PC gamers).  I personally loved the first two Bioshock games and to get 2 games and their DLC in one awesome package is a great deal!  If you have not had a chance to play the games and visit the city of Rapture, you simply MUST check it out! 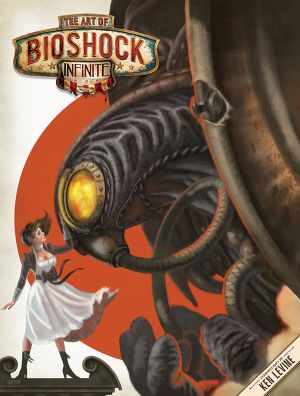 If you are a behind the scenes kind of guy (like myself) you're going to want to have the Bioshock Infinite Art Book!  183 pages of art and early sketches of the characters and locations from the world of Columbia!  The art book is from Irrational Games so you know that the sketches within the book are from the minds of the developers themselves.  If you have played Bioshock Infinite then you know that the game is simply beautiful.  The landscapes, the characters, the action... it all flows seamlessly and you can find out how the developers got there by following thier sketches and their train of thoughts.  A must have for Bioshock Infinite fans!

Now, on to some of the giveaway details.  The giveaway is open to everyone!  But there are some exceptions...  The game is available ONLY to US and CAN residents.  If the winner is from Canada, you may be asked to pay for additional shipping costs.  Please keep that in mind before entering.  The artbook is available to anyone anywhere (Thanks Alex for pointing that out!)!  The giveaway will run from now until May 2nd and the winner will be announced on May 3rd.  The only mandatory entry is to leave a comment with which prize you would like and why.

So what do you guys think?  If I had a choice, I would choose the art book over the game, but that's only because I've already been to Rapture and I'm a little bit of an art geek (Gustav Klimt being a personal favortite.)  Good luck everyone!  Later!