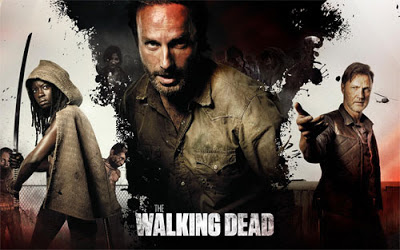 Hey there.  Who caught the season 3 premier of The Walking Dead last night???  Let me rephrase that...  Who DID NOT watch The Walking Dead last night!?!?!  AMC's insanely popular show finally returned last night with the first episode of the season 3.  The last episode of season 2 ended on such a high note that many fans were curious to see how the show would maintain the high intensity.  Michonne made an appearance, the farm was overrun by zombies, Shane's dead, Lori's preggers, we get a glimpse of the prison, and Rick.... Rick finally asserted himself as the man in charge, proclaiming that this is "no longer a democracy."  If you have yet to see S3:E1 - Seed, of the The Walking Dead, DO NOT CONTINUE.  SPOILERS BELOW.  This is not a recap of the episode.  You can go elsewhere for that.  These are just some observations and thoughts that I had while watching the show.  Now...  here are my thoughts on... Seed.

First things first.  The show does not continue immediately where the last season left off.  Everyone is looking a little ragged and Lori is visibly pregnant.  I didn't hear exactly how further after the show continues but it has to be at least 6 or 7 months after the events of season 2.  That surprised me a bit since we caught a glimpse of the prison in season 2 not too far from where Rick and the crew settled for the night.  I would have figured that they would have stumbled across the prison a lot more sooner than months later.

Also, did you see how run down Herschel looked?  He looked like a man that was ready to call it quits.  They all did, actually, but Herschel had that look of a man that just didn't have much hope in humanity.  All of the zombies looked great in The Walking Dead but I thought that the make up crew did an exceptional job making Herschel look like a shell of his old self.  Whether that came from losing the farm or from him finally experiencing first hand for an extended period of time the reality of the world that they now live in. we don't know, but I would like to think that Rick's new leadership approach may be the main cause of it.  Remember that Herschel believed that the zombies were sick and that a cure would soon be found.  He even had his family and loved ones in the barn for that day.  Now that he's forced to leave the confines of the farm and deal with the harsh reality of what's going on around him.  The only one that did not look so run down was Carl.  What we saw in this episode was an aggressive Carl.  One that Rick sent up on a tower in the prison courtyard to shoot for cover.  Carl is no longer a little boy.  I expect to see a young man being forced to man up at a young age to fend off zombie hordes.  It's going to be interesting to see how his character develops as the season plays on. 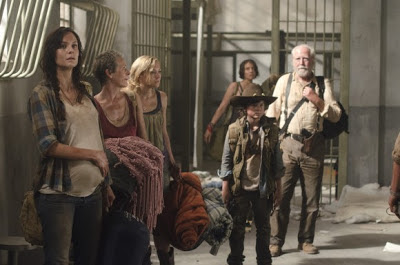 I loved how the prison seemed to be it's own character in the show.  It seemed inviting to the crew when they first stumble across it's protective confines, then it was ominous as Rick and the crew explored some of of the inner corridors of the prison.  I feel as if the prison itself will not just be a place, but a central character in this season.  Also, near the end of the episode, a small group of "others" stumble across Rick and the crew.  I noticed that they all seemed to be wearing blue prison suits.  Where they inmates that managed to survive within the confines of the prison?  Or are they wearing disguises?  I can't wait to see how their group is portrayed in the following episodes!

Michonne!  Michonne!!!  Where are you?!?!?  We see that Angela is still with Michonne but their relationship is anything but peachy.  Andrea has gone from a strong woman, to a woman wanting to die, to a woman with a new lease on life.  She was at the brink of certain death when Michonne chopped the hell out of the zombies ready to chomp down on Andrea.  Andrea makes a brief plea to Michonne to leave her be, but Michonne refuses to leave Andrea alone.  A bad ass woman like Michonne would have no business carrying around an injured person so I'm curious to see what plans she has for Andrea. 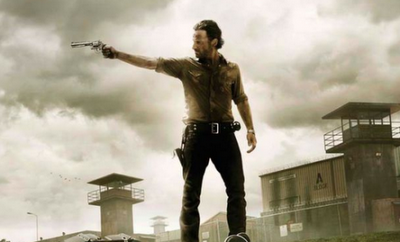 Now let's get on with the zombies and possible death!  They was plenty of zombie blood shed in this episode.  The scene in the prison courtyard was pretty awesome.  Rick and the group fought like a well oiled machine.  The lookouts knew where to go, the aggressors stuck together and covered each other, and those that distracted zombies kept them confused while the attack went on.  It really showed how they no longer went into a battle without a plan.  I thought it was a genius move on the part of the directors to show that everyone had to be on the same page.  And as for the possible death...  Herschel had his lower leg chewed on by a zombie while exploring the inner corridors of the prison.  Once Rick and the group managed to find a safe place to assess the damage done to Herschel, without being questioned, Rick pulled out what looked to be a medical hatchet and proclaimed that he has to do what he has to do to save Hercshel.  And with that, he started to hack at Herschel's leg to remove the infected part of his leg.  Now...  this is what I perceived as the most interesting part.  NO ONE QUESTIONED RICK.  NO ONE GAVE THEIR TWO CENTS.  What Ricks says, goes.  This leads me to believe that Rick has kept his word on his "this is no longer a democracy."  This can be one very dangerous path for Rick and I am DYING to know whether the direction of the show will see Rick turn from a man that means well to a man that will do whatever it takes to survive.  Similar to that from Shane's character.  He also was a cop and this zombie filled world (and some jealousy) pushed Shane to do what it takes to survive.  Will Rick follow a similar path?  Will Rick lose the group and and in the end, stand alone?  We'll just have to wait and see!

So what did you guys think of the episode?  Did you guys catch anything that I may have missed?  Michonne's location perhaps?  I love The Walking Dead and I
Posted by Metallman at Monday, October 15, 2012