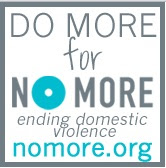 Hey there.  See that button up there?  That is the official button of NoMore.org.  The awesome group behind a strong movement to stop domestic violence and sexual assault.  It's a great cause to get behind.  No one should have to go through something as painful and traumatizing as domestic abuse or sexual assault.  I come from a bad neighborhood in South Los Angeles and it was not uncommon to see or hear violence out in the streets.  On certain nights I would see a man and a woman yelling and fighting outside of their house.  I had friends that were sexually assaulted as kids and it took a great deal of therapy to help them get through that kind of trauma.  I've seen it first hand and during my school days, I helped friends where I could.  Now, as an adult, as a father, I can do more.

Being a Dad is tough job.  No instruction manual, no nothing.  You try to do your best to teach your kids right from wrong... but not every one has the same idea of what is right from wrong.  If you grow up and learn bad tendencies, you are more than likely to pass those tendencies on to your children.  That is why parents need to be informed.  That is why as parents, you need to be able to talk to your kids and have intelligent conversations about the topic at hand.  My son is at the age where girls will start to grab his attention.  Being 13, hormones are raging and "the talk" is on the horizon.  During that talk, I plan on adding the importance of treating his dates with respect.  Every person on this planet deserves to live their lives without the fear that someone out there could assault them.  It just shouldn't happen.

Join me in my fight to help stop domestic violence and sexual assault.  Grab the badge and display it on your website as a show of support for those that have been victimized.  The more the word spreads, the more ears that hear (or eyes that see) will learn that about NoMore.org and educate themselves and those around them about domestic violence and sexual assault.  Really, guys, the violence needs to end.  I don't want to worry that my kids, your kids, or anyone that we may know may one day be a victim.  Later!

Posted by Metallman at Wednesday, October 03, 2012