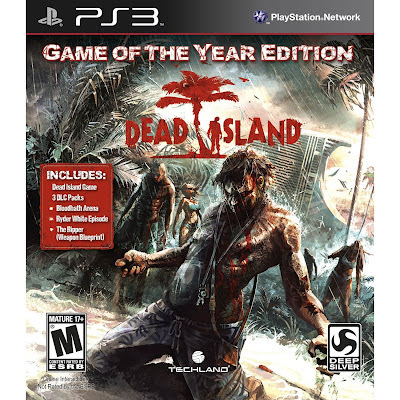 Hey there.  I was wondering whether or not to go with another game or a movie for this giveaway.  A single vote decided the outcome.  lol  Yeah.  1 vote.  I guess we're not all that fond of polls.  lol  Anyways, I gave away Dead Island some time ago and that giveaway went fairly well.  This time around, it should be better.  Not only are you getting the critically acclaimed game, Dead Island, but you're also getting the Game of the Year Edition.  That means you'll be getting all kinds of extra goodies which include 3 DLC packs!  How awesome is that?!

The giveaway will run from now until Sept. 24th and the winner will be announced on the 25th.  Game will be available to US friends only and you will get to choose between the Xbox 360 version or the PS3 version.  Sorry international friends.  A $15 Amazon giftcard is up for grabs for all our international friends.  If the winner is from the States, they too have the option for the giftcard if they already own the game.  Best of luck!!!  Later!!!

This giveaway is brought to you in part from our awesome friends at Just a Dash of Geek.  If you love your geek with a small of cup of crazy, than this site is definitely for you.  lol  The awesome admin there posts giveaways, movies, polls, and all things geek.  Make sure to check it out and let them know that Metallman sent ya!
a Rafflecopter giveaway
You can score Dead Island Game of the Year Edition on Amazon for the awesome price of: